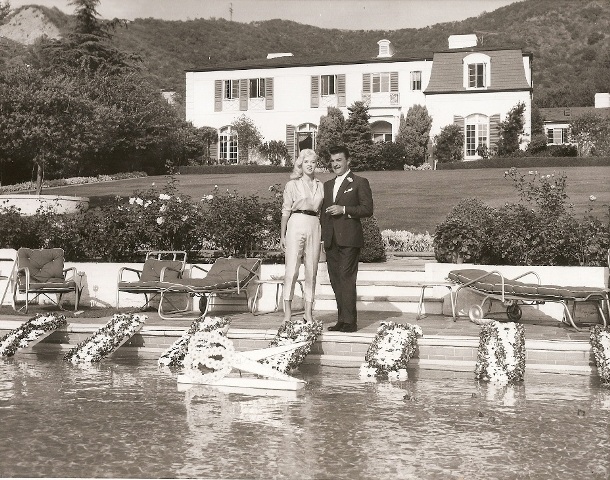 The Calm Before the Storm - Diana Dors and her guest of honor, hairstylist to the stars Raymond of London, admiring the pool decorations (note the floral scissors) just before the start of the unexpectedly wild 1956 party thrown in his honor at Heather House, a party that caught the attention of both the press and the police. 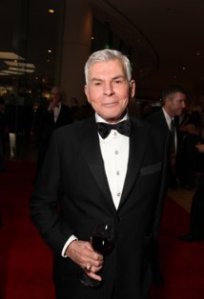 Heather House, the longtime Beverly Hills base of late Hollywood super agent Ed Limato @ 9550 Heather Road, has recently come on the market for $15,500,000. Limato, who passed away in July, was a great fan of historic Hollywood and that love was reflected in Heather House. Built in 1937 and sited on 1.6 acres of lush grounds,  the home has had an excellent Hollywood pedigree that dates back to its 1938 purchase by Hollywood superstars Dick Powell and Joan Blondell. Although Limato was famous for the elaborate parties he hosted on his grand estate, the most memorable, or should I say most infamous, Heather House party was the 1956 housewarming bash held by 1950’s British sex kitten Diana Dors in honor of her personal hairdresser, Raymond of London, that devolved into a melee. What started out as sedate pool party for 200 quickly (just add alcohol) went south when Dors, her husky professional boxer husband Dennis Hamilton, dress designer Howard Shoup and Dors’ agent Louis Shurr (who couldn’t swim), were unceremoniously shoved into the pool from behind by a person or persons unknown. Somehow, this didn’t strike the dunked group as altogether funny and as Hamilton later told the police, “When I got up from the pool I was pretty mad.” Convinced he knew who the culprit was he honed in on UPI photographer Stewart Sawyer and dealt him a serious beating that included a broken  nose, facial lacerations and bruises.  As all hell broke loose around them, guests, including Zsa Zsa Gabor, Howard Keel, Debbie Reynolds & Eddie Fisher, Mike Todd, and Doris Day, began scattering in every direction with the conveniently invited press corps. recording it all for posterity. Only George Gobel escaped the fracas, having providentially excused himself just before the hijinx began. Soon the police and paramedics joined the crowd while Dors, taking it all in stride, obligingly posed for photographers before wandering upstairs to bed. There is no record of what the guest of honor, Raymond of London, thought of the affair, but it was, no doubt, one heck of party. 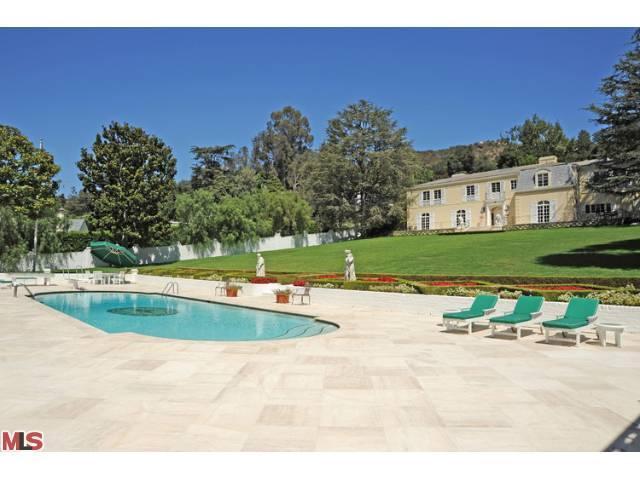 2 Responses to Heather House – Then & Now