The Lost French Village of Hollywood 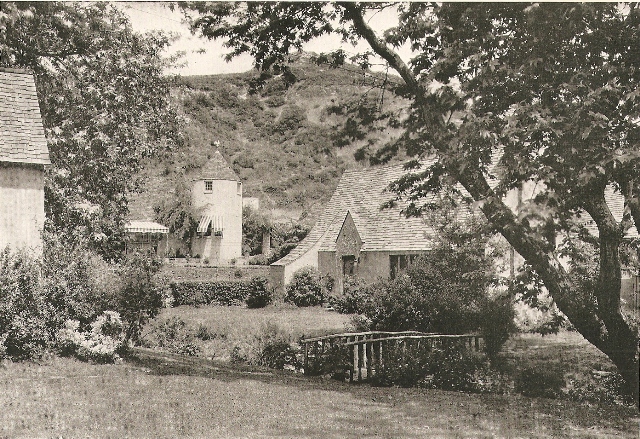 South of France? No, Cahuenga and Highland!

Once, long before the Hollywood Freeway obliterated everything in its concrete wake, there sat at the mouth of the Cahuenga Pass an enchanting little group of bungalows and artist’s studios known as the French Village. 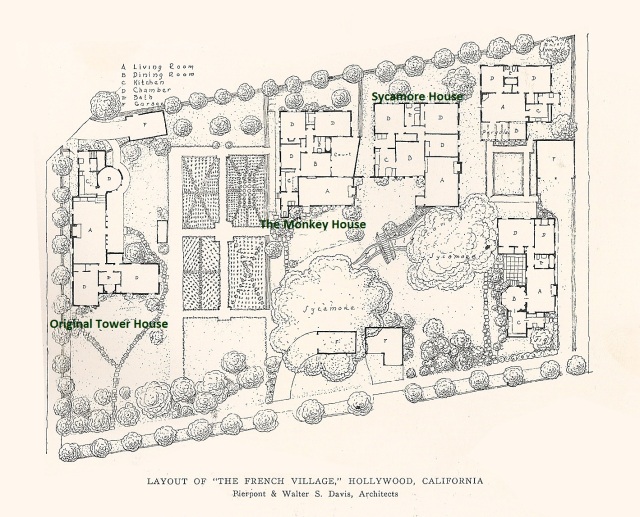 The French Village as completed 1920

The French Village was the work of the extremely talented Walter S. and F. Pierpont Davis, sibling architects who, during their all too brief partnership, designed some of Hollywood and Los Angeles’ most beautiful and romantic structures. Although their oeuvre included homes, commercial properties and even churches, the Davis brothers’ are perhaps best admired for a set of deluxe apartment courts they designed in the 1920’s, most notably the Roman Gardens at 2000 North Highland Avenue (1926) and the Court of the Fountains (today known as Villa D’Este) at 1355 North Laurel Avenue in West Hollywood (1928). 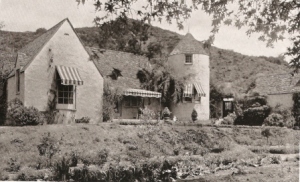 Originally, the French Village consisted of five picturesque cottages designed by the brothers and partner Henry F. Withey, and sited on a triangular plot of land at the point where Highland Avenue and Cahuenga Boulevard converged as they entered the Cahuenga Pass.  Exuberantly French Provincial in style, the cottages featured steeply pitched slate roofs, rough plaster walls and tall exposed brick chimneys. These common attributes aside, each of the cottages were completely unique in design and personality. At least three of the houses were given separate names such as the Tower House, the Sycamore House and the Monkey House, the latter after the elaborate and whimsical bas-relief carving of a group of monkeys cavorting over the home’s entrance. 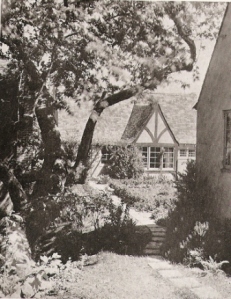 The surrounding gardens, which were later described as “the core of the little community,” were arranged with as much care as the cottages themselves. Flagstone pathways meandered their way through the sycamore shaded grounds, around gardens filled with hollyhocks, California poppies and banana palms, and over a rustic bridge, which surmounted an elongated lily pond. All of the cottages were oriented to take as much advantage of the garden vistas as possible. To keep modern Hollywood from intruding into this little bit of France, a series of shade trees were planted along all sides of the property, screening it not only from the increasingly busy streets on either side, but the decidedly unpicturesque gas station located at the very tip of the property. 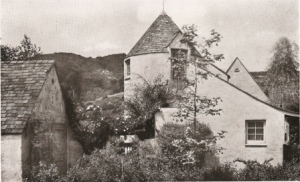 Completed in 1920, the French Village was immediately hailed for its charm and uniqueness with the Brothers and Withey receiving a citation of achievement from the local chapter of the AIA. Unlike most earlier bungalow courts, the French Village was intended for the transitory well-to-do and its construction helped to usher in a vogue for ever more elaborate apartment courts in Hollywood that would last the remainder of the decade with the Davis brothers and Arthur & Nina Zwebell as their master designers. 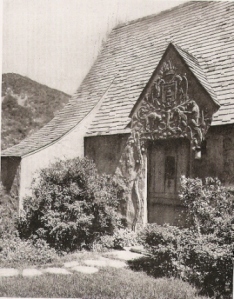 The charm, artistry and location of the French Village made it instantly popular with Hollywood’s creative elite. The amazingly named Minnie Sweet Muchmore became the first occupant of the Monkey House, taking it in 1920 and remaining for more than a decade. Minnie Muchmore, who lived to the ripe old age of 88, was a well-known artist and interior decorator of the day who had been one of the founding members and president of
New York’s famed Pen & Brush Club. Mrs. Muchmore was to become something of a den mother to the quaint little community during its heyday in the 1920’s and the first of a series of artists to flock to the village. In 1923, Wallace Beery became Minnie Muchmore’s next door neighbor when he rented the Sycamore House. Not yet the “lovable ole cuss” he was to become at MGM in the 1930’s, Beery was nonetheless at the time of his residence at the French Village a highly regarded character actor renowned for playing everything from King Richard the Lion-Hearted in Douglas Fairbank’s Robin Hood in 1922 to the caveman villain in Buster Keaton’s The Three Ages (1923).  Beery must have chosen the French Village not only for its close proximity to Famous Players-Lasky where he was under contract at the time, but also to nearby Holly Springs Heights where he was building an impressive hillside home on Pilgrimage Trail that was soon to be dubbed “The Villa of the Villain” upon its completion in 1924. 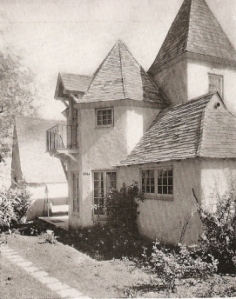 As enchanting as the French Village was, its location sealed its doom from virtually the very outset. Traffic in and out of the Cahuenga Pass was increasing exponentially every year and in 1925 a major street widening project for Hollywood with the somewhat sinister sounding name of the “Five Finger” plan cut the property nearly in half and forced the
demolition of the beautiful Tower House. Rather than disaster, however, the Davis brothers saw the Five Finger plan as an opportunity to actually enlarge the Village and adapt it to the growing needs of Hollywood. In doing so they scored a major architectural achievement. 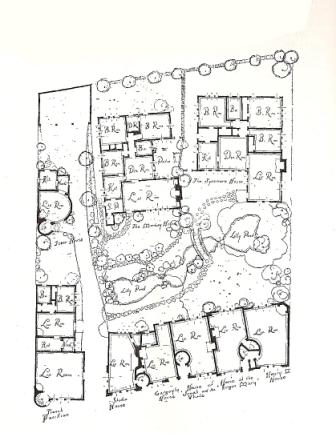 What the brothers did was to add a group of live/work artist’s studios to the property that were as fanciful as anything ever dreamed up by a Hollywood set designer. As Arts & Decoration was to record in 1927, Walter S. Davis “was eager to translate into his architecture some of the vivid mental pictures he had absorbed of the many little art treasures of domestic architecture observed in the towns of France.” The result was a tour
de force of classical French architecture at its most beguiling and picturesque. Gargoyles, heavy timbers, tapestry brick work, bas-relief sculptures, balconies and towers, these and many more decorative elements were woven into the design of the artist studios, which were each given names as whimsical as their designs such as the Gargoyle House, the French Pavilion, the Studio House, the House of the Virgin Mary and the House of Jonah and the Whale. 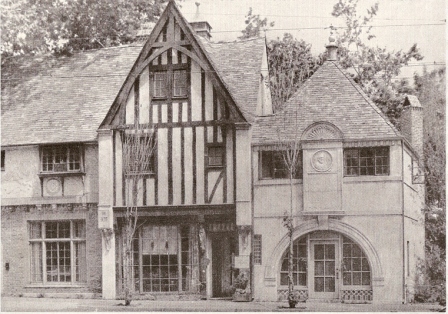 House of Jonah & the Whale, House of the Virgin Mary and the Henry IV studio 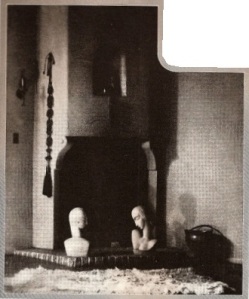 Legendary designer Gilbert Adrian, soon to be so famous he would no longer need a first name, took over the new version of the Tower House in 1927. As expected, Adrian decorated his studio in high style with rich colors and an eclectic mix of exotic furnishings, a combination described as “strange but lovely” by Margaret Craig in Arts & Decoration. The most arresting feature of Adrian’s Tower House studio was its dramatic corner fireplace framed by a pair of deco busts of the designer’s own creation. An entirely different but no less pleasing effect was achieved in the decoration of the neighboring studio residence of Stuart Chisholm. The prominent landscape architect had claimed the House of Henry the Fourth as his own, hanging drawings of some of his recent designs on
the cream-colored plaster walls and placing his drafting table near the beautiful arched front window. Rare books on architecture and landscape design were piled upon an ornate Renaissance table, while plum-colored draperies framed the garden vistas visible from the rear windows of the charming space. A winding staircase led to a colorfully painted kitchen and a bedroom with a steeply pitched ceiling. 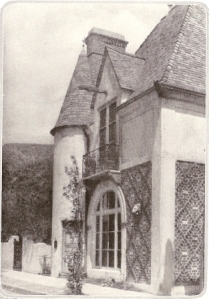 The charming French Pavilion with its elaborate tapestry brickwork, candle snuffer tower entrance and wrought iron balcony, had originally been home to Gilbert Adrian before he switched over to the adjacent Tower House. By 1930, the French Pavilion had been taken over by writer Cyril Hume and his wife, actress Helen Chandler. Both were to achieve notable successes while living at the French Village, Hume as the screenwriter for Tarzan of the Apes for MGM and Chandler as “Mina,” the object of Bela Lugosi’s unholy desires in Dracula (1931), which was filmed just up the Pass at Universal.

Throughout the 1930’s and 1940’s, the French Village continued to serve the artistic community with a steady roster of actors, writers, costume designers, dance instructors and singing coaches in residence. Music and song often wafted out from the open casement windows into the lush courtyard or out into the street. These melodic sounds, however, were getting drowned out more and more by the endlessly increasing traffic zipping, or all the more frequently, crawling up and down the Cahuenga Pass. Progress was both inevitable and unstoppable and the construction of the Hollywood Freeway at the beginning of the fifties was the death knell for the enchanting little court. By 1952, all trace of the French Village had vanished and today it remains only as a dim memory, but a sweet memory it is. 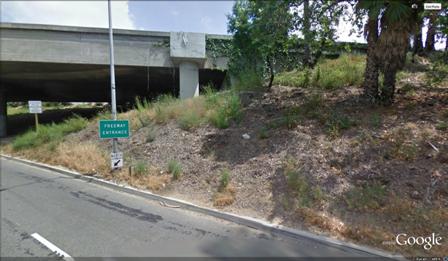 31 Responses to The Lost French Village of Hollywood