Even in 1938, it took a man of, how shall we say, extreme self assurance to have his portrait taken with a cigarette dangling out of his mouth. This was the "official" Frank Lloyd Wright portrait used in the introduction to the January 1938 issue. Photo by the legendary Peter Stackpole.

When people think of the works of Frank Lloyd Wright, they may naturally focus on Chicago and the Midwest, but Wright designed a surprising number of structures in California, including four right here in Hollywood. One of them, the 1924 Ennis house at 2607 Glendower Road in Los Feliz, is currently for sale for $7,495,000, a real drop from its original price of $15,000,000. But the lucky buyer will probably end up spending something around that figure in restoring this legendary but damaged home, which has suffered from years of neglect and water seepage in the hollow cores of home’s concrete textile block walls.

To aid in the restoration of Ennis House, that fantabulous artiste extraordinare, Shag, has created a stunning serigraph, 18″ x 42″, which is available for purchase for $250 through the Ennis House Foundation by clicking here.

Another L.A. area Frank Lloyd Wright currently for sale is his legendary 1923 Millard House, “La Miniatura” at 645 Prospect Crescent in Pasadena. Considered by some to be Wright’s earliest Usonian house, La Miniatura has also taken a steep drop in price from more than $7,500,000 down to its present state of $4,995,000. A Flickr tour of the house is available here. Curbed L.A. reported in December that the house had been pulled from the market after a Japanese businessman had been in negotiations with realtor Crosby Doe to dismantle the house and ship it off to Japan, the mere thought of which must have sent Wright aficionados into violent conniptions. The house, however, still appears to be for sale and is still listed by Doe with its own website here. 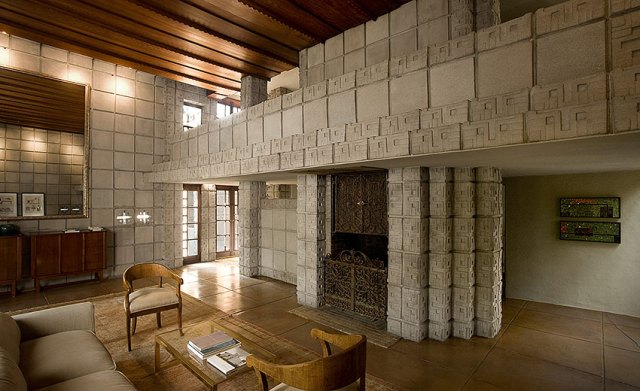 And there’s a third California Wright for sale, the amazing Fawcett House on 80 acres up in Los Banos. Designed in 1955, but not completed until 1961, the Usonian Fawcett House is currently for sale at the more democratic $1,999,999. Check out the website here. It’s a stunningly beautiful house in a unique rural setting in what seems to be a very unlikely San Joaquin Valley location. What an incredible retreat this would make!

All of these homes are going to require not only well-heeled buyers who can afford not only the high asking prices and the high restoration maintaince costs, but also who possess a clear understanding that they become, upon purchase, the caretakers of objects of rare and ineffable beauty meant to be shared and enjoyed not only now, but by future generations as well. There are only a few hundred true Frank Lloyd Wright houses found in the entire world and there aren’t going to be any more. But without proper care, there could be less.