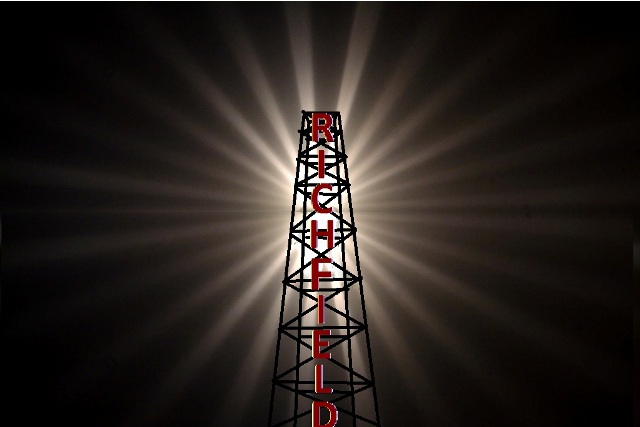 One of the great thrills of automobile ownership has always been in the freedom it affords. Just hop behind the wheel and you’re off to wherever your fancy takes you, from a quick jaunt to the neighborhood grocery store to an epic journey of thousands and thousands of miles. Well…at least in theory. Before we can throw caution to the wind and decide to head up the coast to San Francisco for dinner there are still a number of factors to consider such as gas, where to eat along the way, what road to take, what to do in case of a breakdown and where to spend the night. These issues, of course, are nothing new. They have been a concern of wayfarers from the very beginning, except in earlier times, it was where to get feed for the horse.

"I think I see someone coming!" "Ah, you said that yesterday."

Long ago, the Spanish missionaries developed a unique way of spreading the influence of the church as well as aiding in the colonization of Spain’s far-flung empire in the form of their vaunted system of mission outposts. In California from San Diego to Sonoma a chain of missions were established along the fabled El Camino Real or “King’s Highway.” To the California traveler of the late 1700’s, the missions were a godsend (if you will) having been planned in such a way that they would be located within a day’s ride of each other. Not only could you get a safe, comfortable place to rest for the whole length of your journey, you would get food, drink and even a change of horses if needed. All at no cost! The mission padres were always very grateful to accommodate visitors as it brought both news and companionship to their lonely outposts. When it came to hospitality, the Dons of the great California ranchos went the padres even one better, often leaving a pile of money in each guest room, usually discreetly covered by a lace handkerchief, from which the traveler was free to help himself in the event he was short of funds.

By the 1920’s, this gracious mode of hospitality was gone forever, but the concept of having convenient, safe roadside accommodations had taken on a whole new urgency with the advent of the automobile.  Almost overnight it seemed like everybody had a car and they were most anxious to use it, with flivvers flivvering hither and yon from Yuma to Yreka. These would-be Christopher Columbuses had money to spend, but not always so many places to spend it. Recognizing a need and thusly a way to make lots of money, a group of high-powered Los Angeles executives got together and in July 1928 they formed a corporation known as Highway Communities, Inc. Working in conjunction with the powerful Richfield Oil Company, the newly formed venture laid out a bold and exciting plan to create a chain of hotels, service stations and restaurants that would stretch all the way from the Mexican to the Canadian borders. All facilities would be strategically placed so as to reap the maximum benefit not only from automobile traffic, but from air travelers as well, with each location near an airfield.

The first step in the $10,000,000 plan was to set up a series of dramatic 125-foot high towers topped by high-powered aeronautical beacons running the entire length of the West Coast at fifty mile intervals. Resembling giant oil derricks, the beacons would be emblazoned with huge red neon letters, each one ten feet high, that spelled out R-I-C-H-F-I-E-L-D. Visible for miles in every direction, the beacons were intended to serve as landmarks for pilots navigating the night skies in those pre-radar days. Westward bound transcontinental airships would begin seeing the beacons near Banning, Victorville, Reno, Nevada, the Columbia River Highway and west of Spokane, Washington, helping guide them inward to their coast destinations. And then there were the motorists. A news report from 1928 stated that, “Automobile travelers, it is anticipated, will generally be in sight of a beacon at all times during the night.” Like moths to the proverbial flame, the wayward motorist would be drawn to the shimmering beacons and find a pot of gold (that is for the investors) in the form of a Richfield “village” including a gas station (Richfield, of course), an inviting cafe (known as a “Beacon Cafe”), a small grocery store and in some cases, handsome lodging facilities. Every need a motorist might have was anticipated in the design of the Richfield Villages. The plan was to be done in phases with the beacons established first, gas stations second, cafes third and hotels last.

The bold program got off to a roaring start on December 17, 1928, the 25th anniversary of the Wright Bros. history-making flight at Kitty Hawk, when the first six giant beacons went “live” with a gala ceremony held at Palm City, California, the southernmost site of a Richfield Beacon. As a group of both navy and commercial planes flew in formation overhead, Admiral Ashby H. Robertson threw a switch that not only illuminated the Palm City beacon, but also beacons throughout the state in San Juan Capistrano, Beaumont, Merced, Livermore and Santa Rosa. Within two months, three more beacons, at El Centro, Castaic and Visalia, went live along the “Richfield Lane of Lights.” They were the first group of a total of thirty-six such beacons. The grandest of all the beacons was placed atop the Richfield Oil Company’s own magnificent headquarters building at Sixth and Flower surpassing in height even that of the beacon atop Los Angeles’ City Hall, making it the highest aviation beacon in all of Southern California and a pretty impressive advertising coup for Richfield Oil.

By 1930, the Highway Communities Corp.’s plans were well underway with beacons, gas stations and cafes either completed or under construction up and down the coast. At this time, the corporation turned its attention to the final phase – the hotels.  Seven to nine such structures were planned at various intervals in what was either consciously or unconsciously a modern version of the Spanish mission system, without the freebies of course. These hostelries were to be known uniformly as “Beacon Taverns.” In choosing the name, corporate officials wanted to make it very clear that these were all going to be “taverns” and not “inns,” a rather mystifying distinction considering Prohibition was still in effect. Perhaps the investors were signalling prospective guests that they would find a “convivial” atmosphere at the Beacon Taverns if they asked the right questions.

To design the Beacon Taverns, the corporation turned to the Los Angeles firm of Edwin Ellison Merrill and Lewis Eugene Wilson, a competent team best known today for their design of Calexico’s grand Hotel De Anza in 1931. Uniformity was sought not only in the name of the hotels, but in the look as well. Each of the Beacon Taverns were to follow the same design architecturally, the only change being at the border with Oregon. South of that border all Beacon Taverns would be Spanish in style, north of the border they were to be more along the lines of a Swiss chalet. 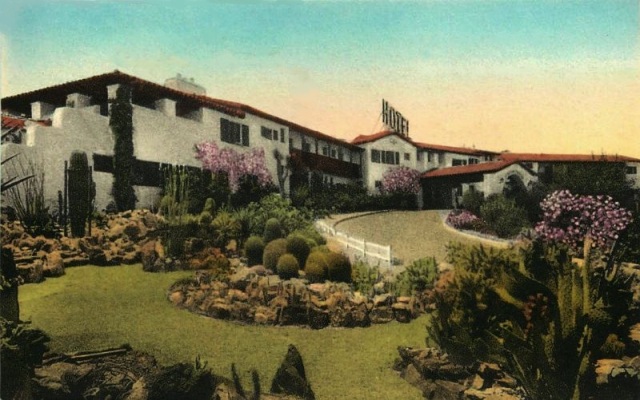 The desert community of Barstow was selected to be the site of the very first Beacon Tavern. From the standpoint of the investors, it was an ideal choice, being at the time a major transportation hub for rail, aviation and automobile traffic. Located on a prominent site on Main Street near the new Barstow airport and the confluence of three major highways, Route 66, 91 and 466, the $180,000 fifty-room structure was opened, appropriately enough, with a big fiesta on the evening of June 27, 1930. While scores of prominent guests danced to the tunes of Jose Aria’s Mexican Troubadours, others wandered about the expansive hotel property, admiring its many charms. 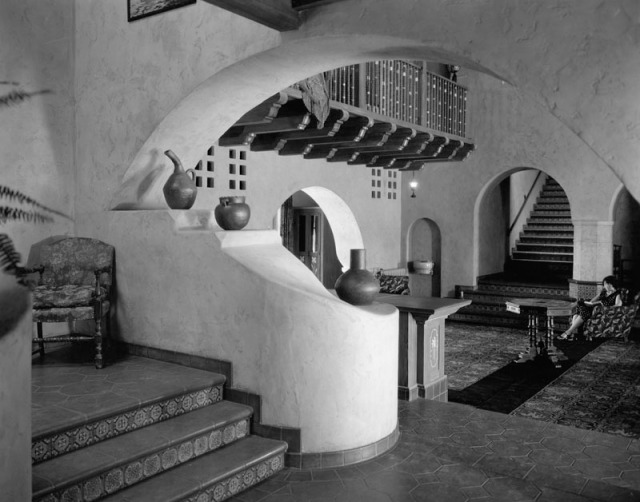 While ostensibly intended as a simple overnight stopping place for auto and air travelers shuttling back and forth between Death Valley, the Boulder Dam construction site or the newly developing community of Las Vegas, Nevada, Barstow’s Beacon Tavern had both the look and feel of a much higher end resort. Wilson & Merrill had done an admirable job of creating the atmosphere of a rambling, romantic Spanish hacienda with a profusion of variegated tile roofs, Monterey-style balconies,  arches and colorful decorative tiles. This was later enhanced by the addition of an elaborate cactus garden, a favorite of visitors and the special pride and joy of resident manager Tom R. Wilson. All fifty guest rooms featured custom designed Spanish Colonial furniture, a fully tiled bath, a radio set and winter steam heating. A much appreciated amenity in the hot desert summer, no doubt, was the ultra-modern air-cooling system, which could cool the guest rooms to a full 18 degrees lower than the temperature outside. Dining facilities were readily available in the adjacent Beacon Cafe and, of course, the Beacon Tavern featured a full service garage for the use of every motoring guest. Rates for overnight accommodations were kept moderate at $3.00-$6.00 per night, not cheap, but not overly priced either.

Beacon Tavern even had its own mascot.

Although construction on the next group of Beacon Taverns at Santa Maria, Capistrano and Visalia was announced to begin within a few months of the Barstow opening, the Depression killed off those plans and Barstow’s flagship Beacon Tavern proved to be not only the first, but also the last in the proposed chain. On its own, however, Barstow’s Beacon Tavern proved a big hit with travelers especially as Las Vegas gained in popularity in the 1940’s, with the Beacon Tavern making for a perfect halfway point along the journey. The Beacon Tavern even gained some popularity with a number of famous Hollywood celebrities with local legend claiming Mickey Rooney, Clark Gable, Norma Talmadge, Clara Bow, F. Scott Fitzgerald and many others, spent the night under the red tile roofs of the Beacon Tavern.

The Beacon Tavern’s glory days came to an end with the completion of Interstate 15 in 1957. Faster cars and a faster route made an overnight stop between L.A. and Vegas unnecessary and the Beacon Tavern quickly went into decline. By the 1960’s, the Beacon Tavern was more of a hangout for Barstow locals than of travelers, especially with the addition of a bowling alley known as the Beacon Bowl and then later as Paradise Lanes. Today, the bowling alley, revamped as the Revolutions Entertainment Center is all that remains of Barstow’s once famous Beacon Tavern, which was torn down in 1970. By then, the “Richfield Lane of Lights” was but a passing memory, memorialized only by the few remaining beacons, which had somehow managed to survive in spite of disuse and disrepair. Even the great Richfield Oil Headquarters in downtown Los Angeles fell to the name of progress, a horrendous and still mourned loss of one of the most beautiful art deco landmarks ever constructed along the West Coast, demolished in 1968 to make way for the bland and undistinguished Arco Plaza.

Today, Barstow honors its lost Route 66 landmark in a large mural painted appropriately on the side of the Revolutions Entertainment Center at 750 East Main Street. And at least one old Richfield Beacon along with its service station is still extant, picturesquely sited on old Route 99 near Mount Shasta, a last surviving link of the glorious Richfield Lane of Lights.