The House(s) That Jack Built – Part I

Jack with one of "The Houses That Jack Built"

Over the next few weeks I’m hoping to do a few posts on some fascinating Jacks – Jack Pickford, Jack London and Jack Donovan. Let’s start with Jack Donovan, a larger than life fellow whose incredible story deserves far more than a simple blog post.  Someday somebody should make a movie about him and I’ll bet it would be a good one. In his 86 years on this planet Jack Donovan lived a thousand lives – actor, producer, architect, yachtsman, lifesaver, civil plaintiff, criminal defendant, bon vivant, playboy, mama’s boy, father, illegal landlord, spousal abuser, aviator, mental patient, perpetual litigant, animal lover, cafe proprietor, writer, Chairman of the Santa Monica Red Cross and, no doubt, many others. He was, as they say, a “man of many parts,” a real Gatsby type whose outward charms always belied a bit of mystery…and a touch of blarney.

One of those rare souls who strove to sample everything life had to offer, Donovan flitted gaily from one excitement to the next and had a grand time in the process. But by doing so, he rarely tarried long enough to leave a lasting impression. One cannot help but wonder what Donovan could have accomplished had he been able to channel his tremendous energy into one vocation. He was, as it would seem, the very prototype of the proverbial “Jack of all trades…” 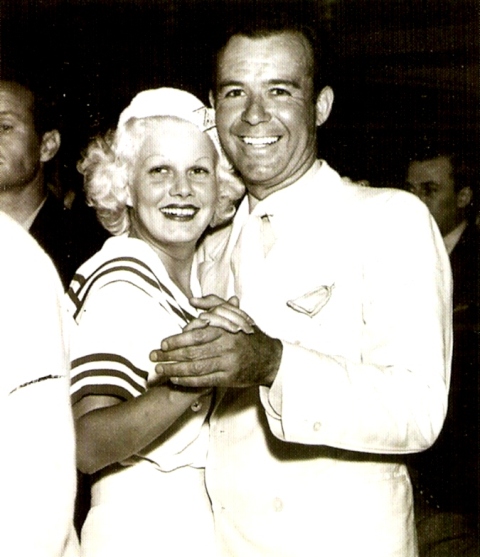 Jack out on the town with Jean Harlow. 1933. (via Harlow in Hollywood)

He could have been big in pictures. Grace Kingsley, legendary reporter for the Los Angeles Times certainly thought so when she declared in 1920 that “A new star has risen on the horizon. Namely Jack Donovan.” After less than a year in movies, the handsome and charming Donovan had already scored leading roles opposite such silent film luminaries as Bessie Love and Edith Storey, a great start to be sure but it still wasn’t fast enough for the frenetic Donovan. Not content to work his way up in the traditional manner, Donovan boldly declared he was launching his own production company, not only a very rare move in those days, but a frightfully expensive one as well.  To finance this costly venture, Donovan had to look no further than his beloved mother Jeanette. Throughout the long intersection of their lives together, one could scarcely find a more devoted mother/son relationship than that of Jack and Jeanette Donovan who, in spite of at least one marriage on her son’s part, remained one of Hollywood’s closest “couples” until her death at just shy of the century mark in 1961. Together they happily worked their way through the million dollar fortune Jeanette claimed to have inherited from her wealthy husband who had died when Jack and his sister Catherine were just children.

A newspaper photo of Canary Cottage (1921)

In announcing his big plans, Donovan declared that the first film to be produced by his company would use as a location the beautiful home at the northwest corner of Cassil Place and Sunset Boulevard, a showplace residence filled with more than $20,000 worth of rare antiques brought over from Europe by none other than Mrs. Jeanette Donovan. The home, at 6633 Sunset Boulevard, was in fact, Donovan’s own home which he had personally designed for himself and his mother after being mustered out of the Army Air Corps. at the end of World War I. Among his many claims to fame, the USC educated Donovan was a licensed architect and throughout the next decade, in between numerous
other ventures, he was to design a number of grand and dramatic structures that were as over-the-top and showy as he was. 6633 Sunset, which was dubbed first “Studio House” and then the more colorful “Canary Cottage” was a charming colonial built around a central courtyard that was somewhat more restrained than some of his later designs.

In addition to serving as a location for Donovan’s first producing venture, The Pluck of the Irish (1920), Canary Cottage quickly became one of the social centers of early Hollywood. Both Donovan and his equally charming mother were well-connected socially in both traditional and Hollywood society and Canary Cottage was frequently the setting of festive parties. Of one such event in 1920 attended by many Hollywood notables the Times wrote rhapsodically that “The handsome gardens were illuminated with Japanese lanterns and a big log fire burned in the outdoor fireplace. A soft blue light over the lily pond and a parrot of gay plumage gave a charming dash of color to the setting.” 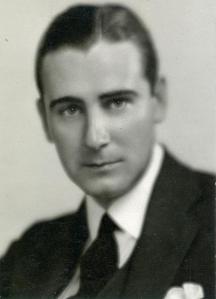 It was amidst this enchanting setting that Donovan created a little artist’s colony, building a set of five quaint English and French-styled cottages around the grounds, which he rented out to a group of well-known film people including actress Jacqueline Logan, writer Lorna Moon, and directors Frank Griffin and Rex Ingram. A major figure in early Hollywood, Ingram lived at Canary Cottage during the time he made the epochal Four Horsemen of the Apocalypse (1921), a major blockbuster of the day that made a star out of Rudolph Valentino.  Ingram married the beautiful female star of the film, Alice Terry, and his “fantastic little cottage” at Canary Cottage was the pair’s honeymoon house. 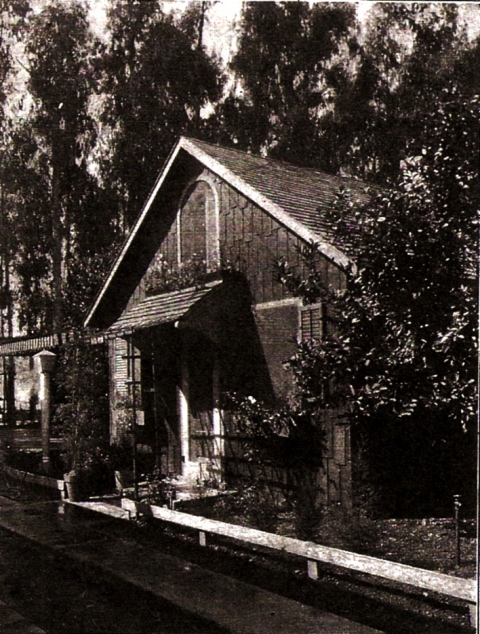 The cottages were so well received that at the end of 1921, Donovan announced that three more were to be built “along the curved driveway among the trees, which is in picturesque imitation of an old European village street, with its lanterns and hedgerows of roses and syringa.” But by the time he made this announcement, Donovan was no doubt already dreaming of something far bigger than cottages. It was time for a castle and within a year he was at work on the home declared to be his “masterpiece,” a grand and romantic Chateauesque residence he called “Chateau de la Paix,” (Castle of Peace), which he sited on a prime three acre site on the edge of Santa Monica Canyon at 1525 San Vicente Boulevard.

An instant landmark from the moment of its completion at the beginning of 1924, Chateau de la Paix was a truly remarkable home, with sweeping vistas across the newly developing Riviera golf course, Santa Monica Canyon and the blue Pacific beyond. “Emblematic of the days of French chivalry,” it was stated, “this castle contains a great open air court flagged with huge stone and flanked on one side by a great open air fireplace.”  Donovan wanted
to recreate in a new world setting the kind of enchanting old world chateaux he and his mother had visited when they lived in France and with Chateau de la Paix he pulled out all the stops. Even the kitchen was done in medieval style with strap iron hooks and hinges. There were a total of fourteen large rooms including a two-story chapel (the Donovans were devout Catholics), which contained a large pipe organ artistically hidden behind a chapel wall.  A set of stone steps at the chapel entrance led to a balcony lined with sixteen-foot high bookcases.  The much commented upon rough-hewn stonework used throughout the Chateau had been quarried directly on the site and cut in such a way to create an “old world” look.  The gray stonework, which was used for both the house and its surrounding walls provided a perfect contrast to the rich green lawns and exotic plantings surrounding the Chateau.

Where Donovan got the money for this castle is not clear. His efforts at independent production had proven to be an expensive failure and his building projects no doubt put a big dent in the family “fortune.”  Throughout his life, Donovan was always thinking big and spending bigger and seemed to be constantly just one step ahead of his creditors. But if anything, he was resourceful and during the period of Chateau de la Paix’s construction he found a new and lucrative way to make money. With $100 cash and some jewelry of his mother’s, Donovan purchased two expensive automobiles, a Kissel roadster and a Cadillac Victoria, which he fixed up and rented out at $30 a day to different production companies. At the same time he rented out some of his mother’s antique furniture collection, which brought in an additional $25 a day. To add to his inventory and thusly his bank account, Donovan learned to “antique” furniture by rubbing second-hand pieces with stone, a bit of sleight of hand that worked well for studio props, but would one day get him into a lot of hot water.

It was another kind of water though that made him a bona fide hero. In August of 1922, Donovan plunged into the surf at Santa Monica Bay and effected a daring and difficult rescue of a couple who had been sucked out to sea by an undertow and pulled under the Crystal Pier at Ocean Park. Five months later he did it again, saving aviator Jack Prendergast, who had been stricken by a sudden cramp that nearly caused him to drown. Donovan was hailed as a hero, receiving heaps of honors and praise including a recommendation by the Red Cross that he be awarded a Carnegie Hero Award.  Although the Carnegie Medal did not materialize, Donovan was justifiably proud of being named a member of the Red Cross live-saving corps. He would remain an active participant of the Red Cross throughout his life, even becoming for a time the Chairman of the Santa Monica division. It would be such an irony that in later years this hero would wind up literally being banned from entering the City of Santa Monica.

But all of that unpleasantness was decades away from the golden twenties enjoyed by Jack and his mother Jeanette. During this period, Donovan seemed to be everywhere at once, saving lives, performing in movies, creating and renting props, making a big splash on the Hollywood social circuit and building elaborate mansions for himself and others. Chateau de la Paix was the setting of a near constant round of parties. It seemed as if he was truly “The Man Who Had Everything.” 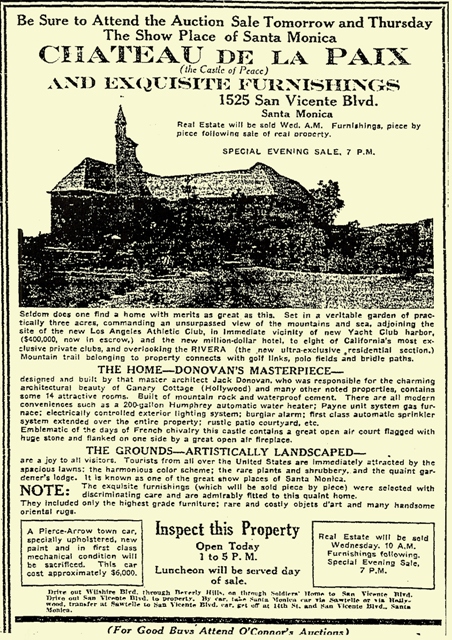 Yet, within only a few months of moving in to Chateau de la Paix, Donovan abruptly put it up for auction, lock, stock and barrel, including furnishing and a $6,000 Pierce Arrow town car to boot. By this time, Donovan had also sold Canary Cottage, which was soon to be replaced by Hollywood’s Blessed Sacrament Church. The reasons for the sudden unloading of Chateau de la Paix are unclear, but it appears Donovan needed the cash for new building projects. That same year he designed and completed another handsome residence just up the road from Chateau de la Paix at 13047 San Vicente Boulevard in Brentwood. This home was very different in style from the Chateau with Donovan evoking the Spanish pioneers. Like the haciendas of old, 13047 San Vicente was but a single story in height with most of the rooms opening up to a covered terrace with views across expansive green lawns towards the Riviera Country Club. Donovan, who also could add landscape architect to his extensive resume, planted a series of screen bushes and trees around the perimeter of the property creating a secluded hideaway, perfect for a major Hollywood star. And that’s exactly who was drawn to it…with disastrous consequences for both Jack Donovan and the star who bought it.

Stay tuned for Part II of The House(s) That Jack Built coming up hopefully as soon as I can turn it out!

9 Responses to The House(s) That Jack Built – Part I