And now the continuation of the amazing story of Jack Donovan and The House(s) That Jack Built. This is Part IV. If you’d like to read the first parts just click on them here: Part I, Part II, and Part III. Part V will follow on Friday and the concluding Part VI, will appear here Sunday. 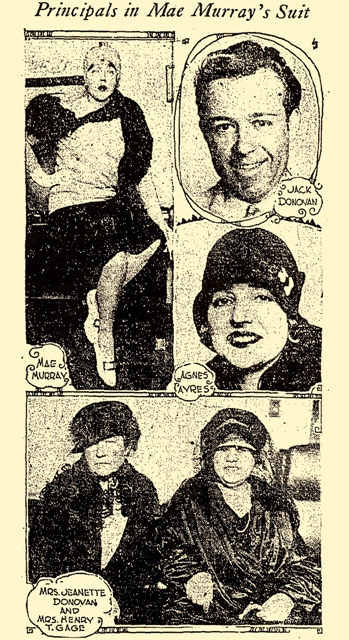 The Murray/Donovan battle had an all-star cast including Agnes Ayres (who testified for Donovan) and former California First Lady Fannie Gage. Mae Murray certainly cut quite a figure on the stand!

The epic battle between Jack Donovan and Mae Murray over “The House That Jack Built” at 13047 San Vicente Boulevard dragged on for five long years and seesawed back and forth with Jack winning the case on appeal, but with Murray prevailing before the California Supreme Court. In the end, however, neither really won, with the costs of the litigation far exceeding any judgment related to the sale of the house. But this was never really about a house, it was about pride, something both Murray and Donovan had to a fault.

At one point the battle became so intense that both the disputed Murray house and Jack and Jeanette Donovan’s own house at 136 Georgina Avenue were sold by the Los Angeles County Sheriff to satisfy liens. Murray’s $25,000-$50,000 home went for $500 and the $80,000 Donovan home went for $2,000. Murray had let 13047 San Vicente go on purpose after having refused to pay the mortgage, Donovan however had not. He had no intention of selling his beloved home, and in one of the most bizarre ironies of this case, as he and his mother watched helplessly on the courthouse steps, their home was sold to none other than Mae Murray who, through her attorney, had been the only bidder. Like most everything else in this saga, however, the sale was not what it at first seemed. It was a technicality arising from the first lawsuit and the Donovans were given one year to find the funds to reclaim the house, which in the end somehow they did. How they did it is unknown, but the ever resourceful Donovans had once again pulled another rabbit out of the hat and were to remain at 136 Georgina for the next twenty years.

Donovan may have been able to get the needed cash by a sudden uptick in his movie career. During his peak years as an architect in the early 1920’s, he had neglected his once promising start as an actor, appearing only occasionally in pictures. But the costs of the Murray litigation no doubt gave him a new interest in acting (i.e. a quick and lucrative income) and in 1927 he signed a deal with Fred J. McConnell to appear in a series of westerns released through the Pathe Exchange. Even with such rousing titles as Hoof Marks; The Bullet Mark and Lady Luck, the Donovan/Pathe westerns did not exactly burn up the screen and the series quickly faded into the sunset. Brief as it was though, the income the westerns generated must have been manna from heaven for the cash-strapped Donovan allowing he and his mother to continue to live in the style that for so long they had been accustomed. 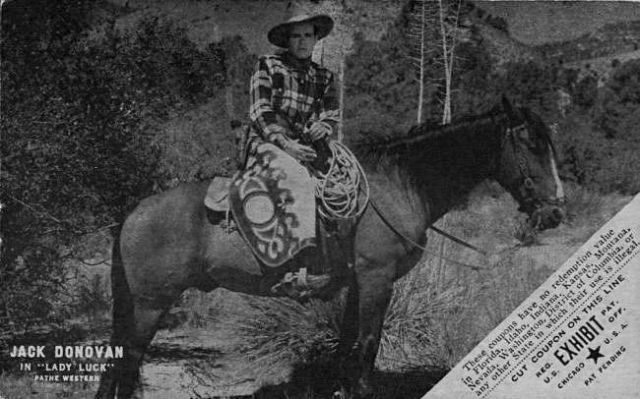 It may just be me, but Jack never quite looked comfortable in his cowboy duds.

Throughout the remainder of the 1930’s, Donovan would make occasional forays back into films, but his heart never seemed to be fully into it and he ultimately left only a passing mark in celluloid history. At one point, even his mother Jeanette stepped before the cameras, having been asked to dance in a grand ball sequence in the Fred MacMurray, Gladys Swarthout picture Champagne Waltz (1937). Mrs. Donovan was selected, according to the press, to add some regal authenticity having “waltzed in her youth in Vienna at a grand ball.” Throughout this saga, Jeanette G. Donovan has appeared as a supporting player, but she is, in fact, a star in her own right. Both she and her son were amazing people and Jeanette deserves a little of the spotlight at this time.

“Lordy, what a life I’ve had,” laughed 92-year-old Jeanette G. Donovan when asked the story of her life. And she wasn’t kidding either. Born in Mercer, Pennsylvania the year America was thrust into civil war, Jeanette was sent in her youth to a convent where she was taught to play the harp. When a group of wealthy men came down from New York on a visit, Jeanette was enlisted to entertain them with a concert, “because they might give the convent some money,” she related. One of them, John Francis Donovan, did more than that, becoming immediately entranced by the beautiful young lady at the harp (From birth to death, Jeanette was a strikingly beautiful woman) and in short order they were married. Eight years later, the assumedly much-older Donovan died leaving a young widow, two children and a million dollars in cash. It was then that Jeanette took Jack and his sister Catherine to Europe where for the next few years they immersed themselves in European culture and society. In 1910 after having first settled in St. Louis, the Donovans headed west to Los Angeles. Breathtakingly beautiful, cultured, charming and with lots of cash to throw around, the Merry Widow Donovan was instantly accepted into the upper echelons of Los Angeles society, becoming intimate with all the local bluebloods who welcomed her into their “salons.”  Having seen the real salons of Europe, the cosmopolitan Jeanette must have been amused by nouveau Los Angeles society, but she fit right in, becoming the particular pet of former California Governor Henry T. Gage and his wife Fannie. 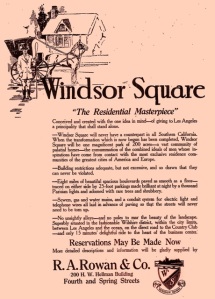 Jeanette also shrewdly became involved in the L.A. real estate market, investing some of her fortune into business buildings on South Main Street downtown. But her biggest real estate splash occurred when she became the very first resident of the newly developed Windsor Square tract. Still considered today one of Los Angeles’ premier residential districts, Windsor Square has long been a bastion of old L.A. society with names such as Van Nuys, Janss, Banning, Chandler, O’Melveney, Hellman and Getty counted among the residents of its grand mansions. In 1912, Jeanette paid $10,500 for one of the choicest parcels in the new district and expended a further $20,000 in the construction of an elegant Neoclassical Revival mansion. Completed in 1913 from plans by Pasadena architect Parker O. Wright Jr., Jeanette G. Donovan’s stately residence at 419 South Lorraine Boulevard helped set the tone for the district and it remains today one of Windsor Square’s most distinctive and beloved landmarks. In 1973, it was made Los Angeles Historical and Cultural Landmark No. 115 by the City of Los Angeles.

With its eighteen-foot wide center hallway, double staircase and grandly proportioned rooms opening out to garden terraces, the Donovan home in Windsor Square was built for large-scale entertainments and Jeanette made certain the house fulfilled its intended purpose. From intimate little soirees to grand balls, the Donovan home was regularly filled with music and laughter and the best that Los Angeles society had to offer. But unlike most other society folk of her day, Jeanette held no prejudices against actors and the rapidly growing film colony starting out up in Hollywood. After all, Jeanette was an artist herself, an accomplished singer, harpist and painter and she adored being around fellow creative types. “I knew them all – all the great ones,” she later declared and she most certainly did. The Donovans had arrived in L.A. at just around the same time the  infant movie industry was making its first toehold in the area. When not making her way around the social circuit, Jeanette found diversion in decorating sets for the nascent film companies, making many friends among the early Hollywood crowd. It was in this exciting and glamorous atmosphere that Jack was raised and it is no wonder he turned out the way he did.

During these early pre-air conditioner years, Jeanette, Catherine and Jack, now a student at USC, would head out to Santa Monica where Jeanette would engage a cottage for the summer. Of course, a “cottage” to Jeanette was the Bishop Conaty house at 144 Adelaide Drive, one of Santa Monica’s finest residences on Santa Monica’s finest street. 144 Adelaide, which later gained some Hollywood notoriety by being the longtime residence of Mary Miles Minter and her indomitable mother Charlotte, remains today much as it did in the mid-teens when it was the summer retreat of the Donovans. Although they lived in a spectacular house in Windsor Square and later another fine home, the Canary Cottage, up in Hollywood, the Donovans collective hearts were won over by Santa Monica and from the time they built Chateau de la Paix in 1924 at 1525 San Vicente Boulevard, the Donovans became proud Santa Monicans, which they were to remain even long after Santa Monica ceased to be proud of them.

Be sure and stay tuned for Friday’s continuation of The House(s) That Jack Built, Part V. “From Casa Grande to the Chewing Gum and Ash Tray Palace.”

9 Responses to The House(s) That Jack Built Part IV