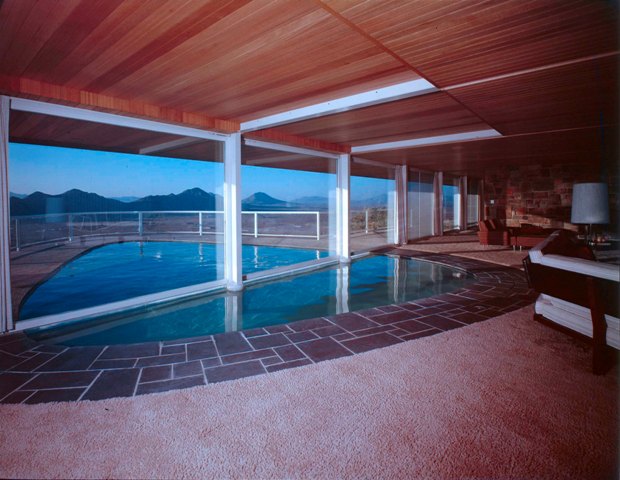 A few months ago I did a post on the historic Apple Valley Inn and was delighted with the response it generated from both those who knew and loved the Inn in its heyday and those who had never heard of it until now. I even heard from the granddaughter of “Mr. Apple Valley” himself, Newton T. “Newt” Bass, which was, of course, a real treat and a great honor as well.

Newt Bass and his partner Bud Westlund were the founding fathers of Apple Valley, having purchased 6,300 acres of high desert land during the early 1940’s with the original intention of developing a cattle ranch. Instead they turned it into a real estate development known as Apple Valley Ranchos, a huge success that made both Newt and Bud millions. Unlike some developers who take the money and run, however, Newt and Bud remained committed to Apple Valley from its inception into full maturity like proud parents doting over a favorite child.

Newt Bass was a fascinating man. A self-made millionaire who had been raised on an Indian reservation in South Dakota, Newt moved to California at the age of 18 and became a roustabout in the burgeoning oil fields of Long Beach’s famous Signal Hill and down at Santa Fe Springs. By 31, the enterprising Newt had begun drilling his own wells and by the time he was 40 he’d amassed such a fortune he was able to retire. It was his search for a perfect place to have a cattle ranch that led him to Apple Valley.

Newt was able to watch over Apple Valley’s phenomenal  growth both literally and figuratively from a spectacular modernistic house he built on a 20 acre hilltop site just above the Apple Valley Inn. Appropriately named “Hilltop House,” Newt’s home offered panoramic vistas in virtually every direction with views stretching into hundreds of miles taking in not only Apple Valley itself but the Mojave Desert, Antelope Valley and the San Bernardino Mountains beyond. “A view so vast,” wrote Pictorial California in 1960, “that outer-space high is the feeling when standing within.” 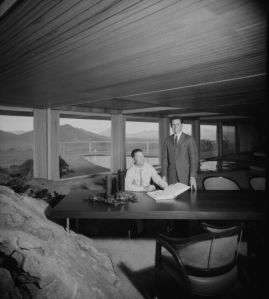 In choosing an architect for Hilltop House, Newt made a very exciting and “out of the box” decision by engaging an architect not from Southern California, but from down in Mexico. Although relatively unknown in the United States, Francisco Artigas was a very prominent figure in Mexican architecture with many notable designs throughout his country including his work in Mexico City’s upscale neighborhood of Jardines de Pedregal de San Angel. The young Artigas designed a sleek and stunning hilltop house that not only fit into its rugged setting it actually incorporated parts of it into the house itself with a boulder outcropping a prominent feature in the home’s combination living/dining room.

Another spectacular feature was the indoor-outdoor swimming pool Artigas incorporated into the design. “To coax indoors the sunshine by day and the stars by night,” wrote Pictorial California, ” electric push buttons open sliding panels above the pool to become three skylights. At night what a sight it must be – for Apple Valley and the Mojave have the most brilliant of stars.”

Hilltop House was definitely intended as a retreat for Newt himself. There was not a feminine element to be found in either the architecture or the interior design, which was done in combination with Artigas himself, who designed all of the furniture, along with local interior designers Jim Richardson, Fred Miller and Joel Harper of Albert Parvin. Artigas had even lived in Apple Valley for a while in order to get a proper feeling of the area before taking on the design of Hilltop House.

Artigas took as much advantage as possible of native materials using stones found right on the hillside to create a dramatic fireplace wall. The lounge chairs and ottomans are upholstered in a terra-cotta fabric set off by silver legs.

The combination living/dining room with floor-to-ceiling windows on three sides. The ceiling is mahogany. Carpet is caramel-colored wool.

Well, you can’t get much more masculine than a wall of guns within arm’s-length of the bed.  Newt’s enormous Walnut with Ebony inlay Victorian bed was supposedly a prop from Gone With the Wind.

Another view of the master bedroom showing built-in television circa 1957 in the native stone fireplace wall. Pool is just a few steps away.

Bath time was sexy time at Hilltop House with its unique double shower lined with Florient Rose Italian Marble in shades of tan and peach to apricot tones. One end of the bathroom was mirrored from floor-to-ceiling allowing a full view of the valley beyond from within the showers. 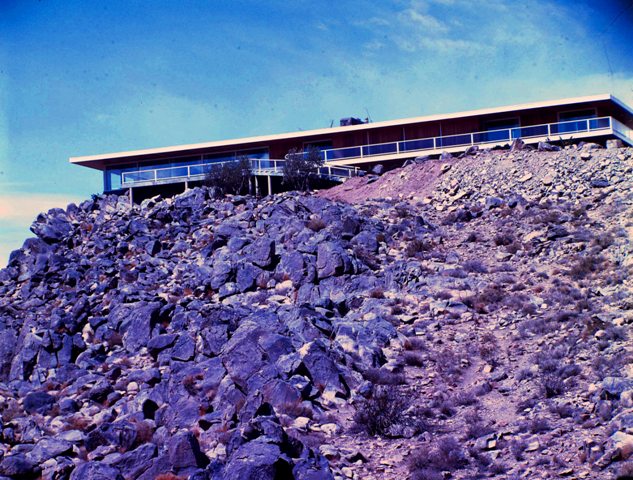 Newt Bass’s spectacular Hilltop House was Apple Valley’s most prominent landmark until a fire nearly destroyed it in 1967. It was restored and rebuilt, but from then on it was used largely for office rather than residential space. Over the years, Hilltop House has fallen into disrepair and disuse until it has become a gutted derelict, a skeleton of its former self. This is a real tragedy. As prominent Apple Valley realtor Craig Skibiski has noted  “Depending on who you ask today, the Hilltop House is either up for auction, haunted, being remodeled by the Town of Apple Valley, or being bulldozed soon.” Let us hope this famous home, like the old Inn 300-feet below it, will be restored and again take its place as Apple Valley’s premier residence. This is a modernistic masterpiece steeped in High Desert history that Apple Valley cannot afford to lose.

Photographer NikZane has taken some stunningly beautiful shots of the forlorned but still spectacular Hilltop House ruins that can be found on his Flickr page here. 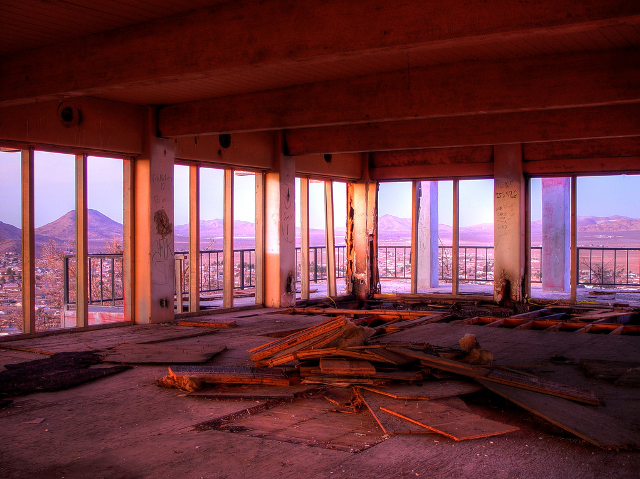