(Apologies in advance for the punny title.)

In the annals of film history the name Sol Lesser might not be a household one, but it remains a most interesting one to be sure. This veteran producer of more than 100 films had a remarkable career in the entertainment industry that spanned from the age of the Nickelodeon to the age of television. While he may not have produced a lot of enduring classics (Our Town being at least one exception) Lesser nonetheless brought a lot of hearty entertainment to the screen including a series of action packed Tarzan jungle pictures and thrill-a-minute Buck Jones and George O’Brien westerns.  For those of you following at home, you may remember Lesser in my recent postings on the Siege of Fort Anthony. It was he who had been the spearhead and ultimately the scapegoat for the ill-fated Hollywood Museum project of the 1960’s. This venture was a rare failure for the prolific Lesser, who left behind quite a legacy of achievements in his half-century career in motion pictures.

To get a sense of what an irrepressible powerhouse of energy, determination and enthusiasm Sol Lesser was it should be noted that in order for him to “retire” at age 36 in 1926, Lesser had to divest himself of his interest in no less than forty separate corporations including the powerful West Coast Theater chain, Equitable Realty Corporation and Principal Pictures, the latter a busy production concern with its own studio at Santa Monica and La Brea. A true motion picture pioneer, Lesser started in the business in 1909 selling ice cream and taking tickets at his father’s San Francisco Nickelodeon. A decade later he was operating his own studio in Hollywood making successful pictures with such early film heavyweights as Annette Kellerman and Jackie Coogan while at the same time continuing to expand his growing theater chain, buying and building new theaters until it included more than 160 theaters up and down the Coast. During this frenetic period, Lesser continually shuttled between Los Angeles and New York to such an extent the Los Angeles Times humorously (but accurately) described him as the movie industry’s “champion transcontinental commuter.” Through all this he still managed to regularly lend his valuable name and time to a host of worthy causes including United Jewish Relief and the Motion Picture Relief Fund not to mention being a husband and father to two growing children.

For a man with such an intensive work schedule relaxation was no doubt a premium commodity and Lesser found great pleasure in his membership in the exclusive Uplifters Club. Founded in 1913 by business executive Harry Haldeman and Wizard of Oz author L. Frank Baum, the Uplifters was a very exclusive “by invitation only” concern made up of some of the city’s most notable male citizenry drawn from the ranks of the prestigious Los Angeles Athletic Club. Hollywood was always well represented in the Uplifters with many top names of the day including Will Rogers; Harold Lloyd; Michael Curtiz; Hal Roach; Edward Everett Horton; Darryl F. Zanuck; George Arliss; Charles Ray; Irvin S. Cobb; Charles Farrell; Leo Carrillo; Edgar Rice Burroughs and many others on the roster of members.

The Uplifters, or “Cuplifters” as it was waggishly described during Prohibition, provided a way for these prominent and busy men to blow off steam, have fun and network all at the same time. The big highlight for the club was its annual outing or “Hi Jinx,” a raucous and rollicking good time filled with food, drink and comedic entertainments, the latter often being written and always performed by club members. And as these were strictly stag affairs, the men happily donned wigs and dresses when the script called for such sacrifices. Lesser would sometimes be called upon to produce the shows, which could be quite elaborate and as enthusiastically anticipated, performed and received as any Hollywood super production.

The LAAC's newsletter, The Mercury, reports on the latest doings at the Uplifters. 1919. (from Our First Century, Betty Lou Young's history of the LAAC)

One of the great appeals of the Hi Jinx was with its bucolic outdoor setting. No stuffy ballroom or meeting hall would ever do for such robust revels and for the first few years, the Uplifters would take over a nearby resort as the venue for their lusty frolics. In 1919, however, the membership had managed to settle on a permanent spot purchasing forty sylvan acres (later expanded to 120) in Rustic Canyon right near Santa Monica. An existing building on the property was converted into a club headquarters with dormitory space for 100 and other improvements added over time including a swimming pool, tennis courts, riding trails, barbecue and even a polo field. When the original clubhouse burned in 1922 a new and more elaborate building, designed by noted Los Angeles architect and Uplifters member William J. Dodd, was erected (and still exists) at what is now Haldeman and Latimer Roads.

Interior view of the club house as it appeared in the January 1936 issue of Country Life in America. (Fred R. Dapprich)

The enchanting setting in Rustic Canyon was simply too good to use for just one brief period a year and from the start members were encouraged to build cottages on the grounds. Tradition holds that banker Marco Hellman really got the building boom rolling when he had three movie set pieces from Charles Ray’s disastrous 1923 production of The Courtship of Miles Standish brought to the ranch and reworked into weekend cottages by the very talented Alfred Heineman. Whether or not the movie-set legend is true these charming log cabin/lodge style cottages still exist at 36, 37 and 38 Haldeman Road, the latter being Haldeman’s own cabin, and are treasured Uplifters landmarks. Other members followed suit including Sol Lesser and in 1928, he engaged Los Angeles architect Heth Wharton to create a weekend retreat for himself and his family that would harmonize with its rustic setting. Wharton did an exceptional job in relating the house to its canyon setting and his charming design won much praise including an Honorable Mention in the 1929 National House Beautiful Competition and a full layout in the August 1930 issue of California Arts & Architecture. Although it has largely vanished from view owing to walls and the growth of landscaping, the Lesser cottage at 20 Latimer Road remains a hidden little Uplifters treasure that, like the fascinating man who built it, should not be forgotten. 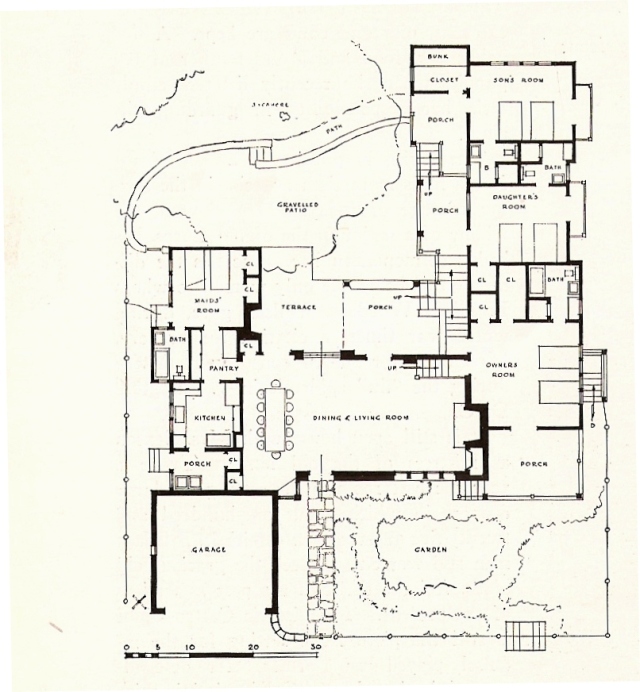 In the shelter of the Santa Monica hills, a simple cottage has been built for Mr. Sol Lesser by Heth Wharton, architect, as a quiet week-end resting place, to secure a rural atmosphere without sacrifice of modern comfort. 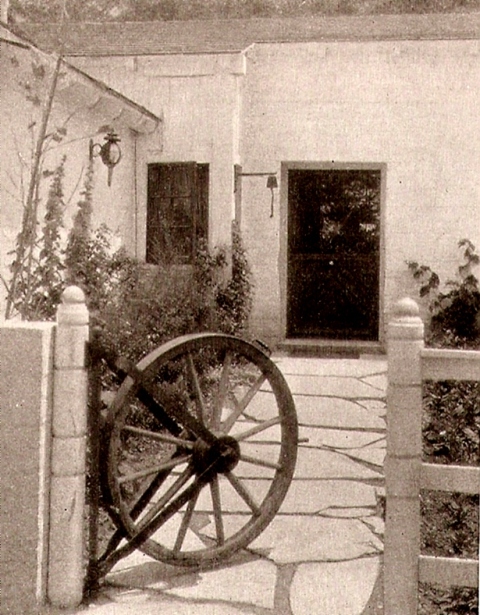 An old wagon wheel, found in a junk shop, was converted into a front gate; rough yellow flagstones form the walk.

The exterior of Mr. Lesser’s cottage at Santa Monica is “Stone-tile,” whitewashed, with porches and “leantos” of wood boards and battens, painted white. 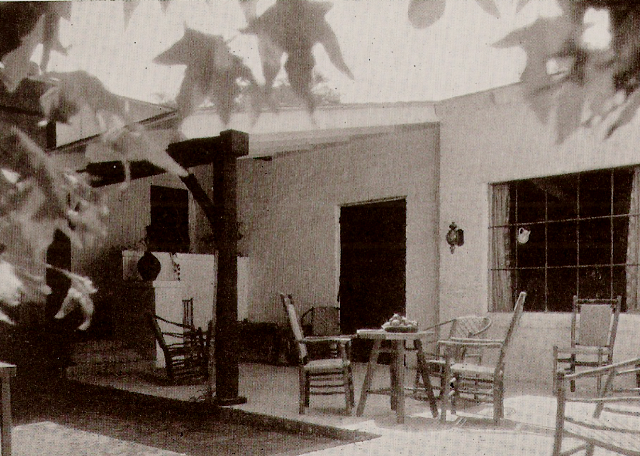 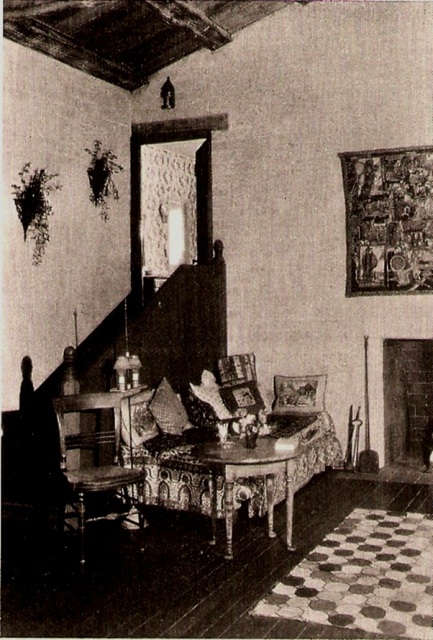 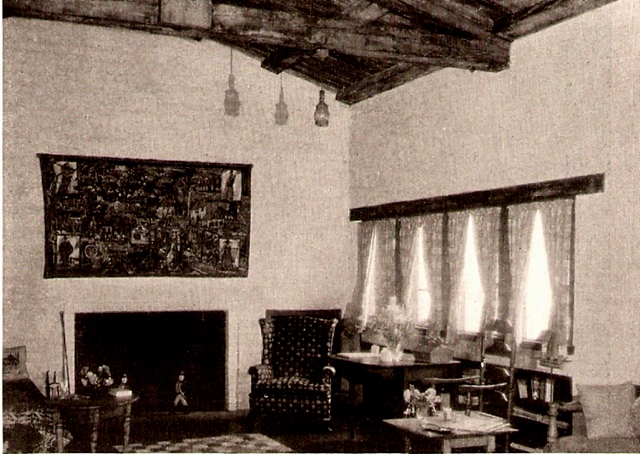 A straight-foward simplicity characterizes the interior of Mr. Lesser’s cottage at Santa Monica. The furniture, all old, was picked up on trips through New England and Canada. A batik hanging by John Hager is a melange of the Oregon Trail and California. 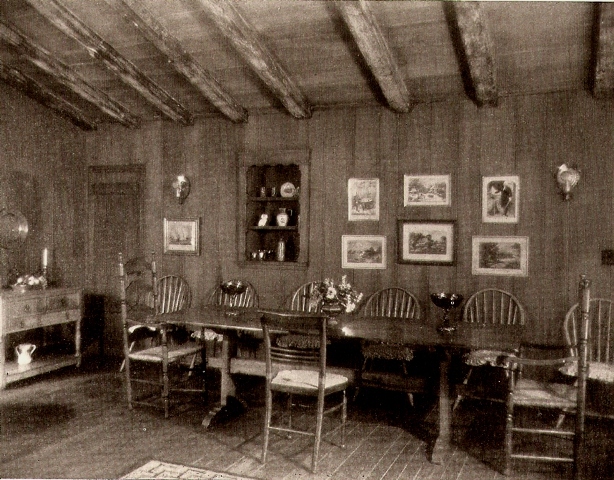 9 Responses to A “Lesser” Known House in Rustic Canyon