The recent news that Hank, a nine year-old Maine Coon Cat (52 in human years), has entered the race for United States Senator from Virginia is already causing the fur to fly in what is surely going to be a nasty scratchfest over who will replace outgoing Senator Jim Webb (D) in the upcoming election. Although Hank has been declared to be the purrfect catidate in some circles opponents have already launched attack ads against the independent feline politicat warning his election would be a cat-astrophe and labeling him a typical “fat cat,” the last thing we need more of in Washington. And he is being roundly derided for his reluctance to release either his tax returns or birth certificate. Hank, however, isn’t coughing up any hairballs over the criticism and hasn’t lost any of his regular 14 hours of daily sleep, a regimen that would still make him more effective and attentive than most members of Congress.

The controversy over Hank’s bold bid for national office is a reminder of the overly important and critical role cats believe they play in our lives and their obvious desire for ultimate world domination, something, at least in this household, they seem to have already achieved. However, in spite of their smug sense of entitlement, it is but a humble dog that has achieved, to date, the highest elective office ever attained by a family pet. In 1981, Bosco, a black Labrador and Rottweiler mix, was elected Mayor of the small community of Sunol, California, beating two humans for the coveted post. Over the next dozen years, Mayor Bosco served his community with great dignity, acting as grand marshal for the annual Halloween parade and officiating regularly at civic and social functions always neatly attired in his custom-made tuxedo. When the town nearly burned to the ground in a disastrous fire in December 1987, Mayor Bosco brought great comfort to the citizenry by lying on his favorite rug and “looking sad.” 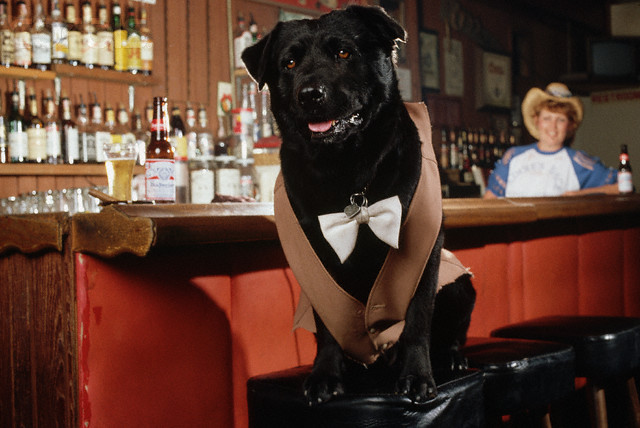 The passing of “America’s First Dog Mayor” in 1994 was a great blow to Sunol, but even in death, Mayor Bosco continues to serve his beloved community. In 1999, a new restaurant/saloon called Bosco’s Bones and Brew was opened in Sunol that features a special animatronic recreation of the famous canine politician that has been engineered to pee beer. (Hank, take note. This trick could get you elected.)

Mayor Bosco is still serving the needs of the good citizens of Sunol. (lizthayer.blogspot.com) 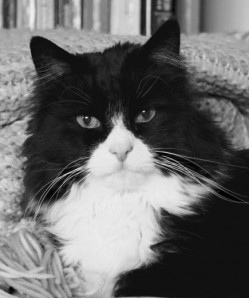 Whether or not Hank becomes Senator Hank in November it is clear cats have and always will be an important part of our lives. In 1927, one local cat became so important – and wealthy – that his story became national news – and a scandal in the process. His name was “Kitty Boy,” a pussy cat of considerable charm that was, for several years,  the beloved companion of a wealthy and eccentric widow in Long Beach named Elizabeth Lynch. The pair was, by all accounts, devoted to one another with Kitty Boy providing much love and companionship to the otherwise lonely matron. When Mrs. Lynch passed away at the age of 66 on March 13, 1927 it was discovered that she had not only not forgotten Kitty Boy in her will she left the lucky feline the bulk of her estate, which included two valuable city lots and not one, but two houses, located adjacent to each other at 1769-1771 California Avenue (Martin Luther King) in Long Beach, right at the corner with Pacific Coast Highway. According to the will, Kitty Boy, the newest member of the 1%,  was empowered to engage a tenant who could live with him rent free in exchange for caring for his kitty whims and kitty needs. If Kitty Boy lived for fourteen more years then the caretaker would come into full possession of all the domain Kitty Boy surveyed. However, (cue ominous music) in the event Kitty Boy should die within the next nine years following his mistress’ death then the entire estate would go instead to the Long Beach Humane Society.

Not unexpectedly, the public announcement of the terms of Mrs. Lynch’s will set off a flood of applicants from around the country all vying for the opportunity to be Kitty Boy’s human slave. Judge Charles S. Crail, who was overseeing the unusual case, was deluged with calls, letters and telegrams, each more heart-rending than the next. A typical telegram, this one from Portland, Oregon, read in part: “Regarding the home of Elizabeth Lynch, I am raising four motherless children who have been given to me upon the death of their mothers. Two of the children’s mothers had tuberculosis so am anxious to take them to California, my husband having deserted me: cannot afford to do so. If I could have the home to live in would be so good to Kitty Boy and be sure of the home for my babies.” That the telegram was sent collect did nothing to sway Judge Crail into sympathising with the woman. In fact, he grumbled to the press that sending collect telegrams was a very poor idea. “My clerk had to go without lunch yesterday for having to pay for one of these wires,” he declared over the 70 cent charge. “He can’t stand that sort of thing for very long, and we need the clerk.” Judge Crail. Boss of the year.

Collect telegrams and hungry clerks, however, were to be the least cause of headaches for Judge Crail. Within days, a set of claimants appeared, each swearing they were the legal heirs to the estate of Elizabeth Lynch. Although she claimed no living relatives, a set of nephews and nieces, made themselves known including George B. Childers of McKenzie, Tennessee; Homer E. White of Union City, Tennessee; and Mrs. Emily Clara Scarott of St. Louis, Missouri. Additionally, Mrs. Ella Swickard of Long Beach, described as a “friend and neighbor” of Mrs. Lynch, declared herself to be the sole representative of the purported Lynch heirs and planned to petition the court to be appointed administrator of the estate. Attorneys for Mr. Childers announced their intentions to challenge the legality of Mrs. Swickard’s petition. The hissing had begun and a catfight was in the offing.

With all the legal wrangling heating up someone finally asked a question that had apparently not been asked up to this point – Where, in fact, was Kitty Boy, the object of all this attention? The Judge then ordered the cat to be found at once. And after a lengthy search a most shocking discovery was made – Kitty Boy had been murdered!

As it was discovered, even before he could even run up a big bill for cat toys, the hapless Kitty Boy had been secretly and unceremoniously bumped off, chloroformed by orders of the man entrusted with his care, a one Mr. J.G. Cannon of Long Beach. The news had been shocking in itself, but eyebrows arched higher when it revealed that Mr. Cannon’s profession was real-estate. Could Kitty Boy have been deep-sixed for commercial gain? The Humane Society of Long Beach, weighing in on the case, wanted to know and asked for an investigation. Cannon defended his actions declaring it was only out of necessity as, within days (minutes?) of his mistresses demise, Kitty Boy developed a case of “incurable mange” and had to be put down or, as the Prescott Evening Courier reported, “gently murdered.” 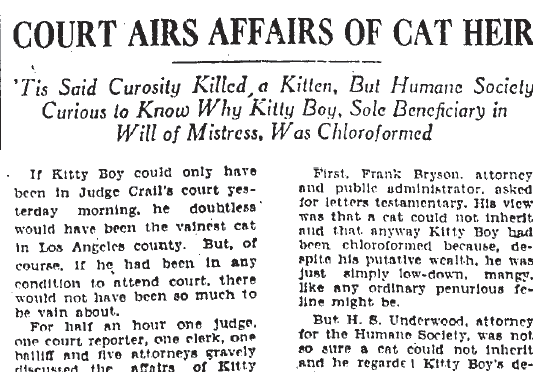 Although the explanation seemed to some a bit fishy, kindly Judge Crail (you know, the one who made his clerk pay for a collect telegram with his own lunch money) considered the matter dead, if you will, and did want to launch an inquest into the death of a cat, no matter how suspicious the circumstances. His only concern was now what to do with the late feline’s assets and whether or not they even were the cat’s legal property. The first hearing was so convoluted no decision could be made and a new one had to be scheduled for april 21st. This too was delayed as more evidence was gathered.

Finally, on May 13, 1927, two months to the day of the death of Mrs. Lynch, Judge Crail convened the case in his courtroom. By now the battle had coalesced between Frank Bryson, public administrator, working in concert with the purported Lynch heirs, and the Long Beach Humane Society, which now had a vested interest in the case as they would be the beneficiary of the estate should the court find in favor of Kitty Boy. Bryson attempted to convince the court the whole matter was a silly one as cats can’t inherit property, but the attorney for the Humane Society begged to differ introducing evidence that a dog had legally acquired property in a Kentucky case and there was a long precedence of English dogs and cats inheriting. After hearing this, Judge Crail stopped the pussy footing. “Well anyway, the cat’s dead,” the jurist declared, “which, while a grave misfortune for the cat, is a relief to the court as it obviates a great deal of argument on a hot day. There is no doubt as to the capacity of the Humane Society to inherit,” he continued. “The will is admitted and Mrs. Jackson (of the Humane Society) may have letters.” 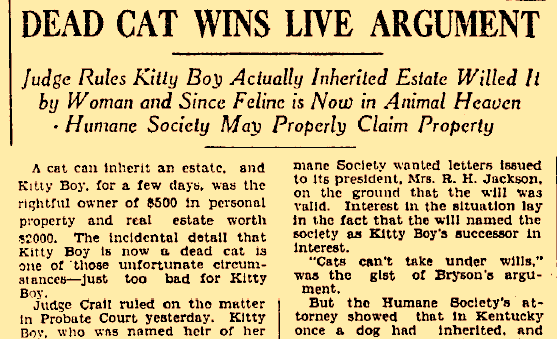 Although already gone to Kitty Heaven, Kitty Boy had scored a big legal victory for his fellow animal legatees and helped set a precedent still followed today in cases where pets are granted real property through inheritance. Today there are millionaire cats and dogs enjoying the life of Riley thanks to trend setters like Kitty Boy. Or to co-opt a phrase from America’s most famous 1-percenter – “Pets are people too, my friend.”

Kitty Boy’s houses were later sold off and today, the houses owned by a cat, are now part of the playing field of long Beach Polytechnic High School. The proceeds, no doubt, went to the aid of many other cats and dogs in the Long Beach area.