They still like concrete houses in China. (via National Geographic)

A century ago there was a great deal of excitement over the possibilities of using concrete to build houses – not just for foundations but for the whole house itself. After all, what was there not to like about concrete? It is impervious to fire, completely insect proof, easy to clean, won’t rot and can handle itself quite well in an earthquake. And it was cheap (although the equipment needed to produce it wasn’t). Thomas Edison was such a believer in the wonder composite he even went as far as building a whole neighborhood of all-concrete houses in Union, New Jersey, a place where they still curse his name every time they try to hang a picture.

Although Edison’s houses were a little on the extreme side, with certain adjustments, the idea could be translated into a workable formula. In fact, the idea of using concrete for home construction was warmly embraced by some of the finest designers of the Arts & Crafts movement and in their capable hands the humble composite could be transformed into something quite artistic – the “concrete bungalow.” Lest the term conjure up images of a bunker, the bungalow was not entirely concrete. Wood, tile and other finishes were used within and without to good effect, but the basic form was concrete spread over metal lath. Outwardly, they generally looked indistinguishable from any other bungalow of the period, but inside they were, as one contemporary observer noted, “practically indestructible.” With all the benefits of concrete construction, it seems kind of a shame they never caught on as their boosters had expected. As the Los Angeles Times wrote in 1910, “Many architects in fact believe that the peerless products of Southern California cement and tile industries will in time almost entirely replace frame construction.”

While that did not happen it was not because the bungalows and other concrete-based houses were unattractive or unlivable. Perhaps the sound of a concrete house did not appeal to the visions of happy homemakers. Nevertheless, a number were built around the country including a few right here in good old Hollywood. 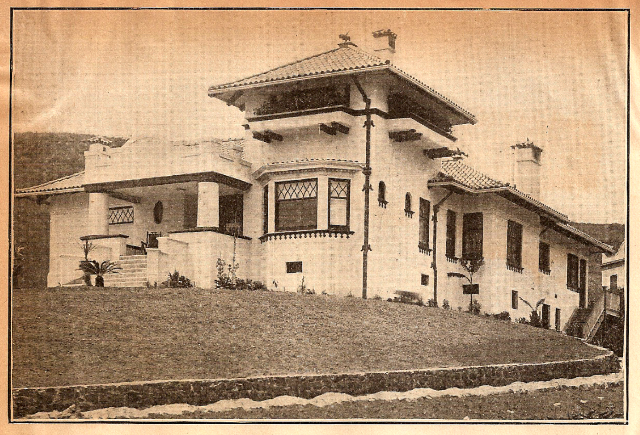 Around 1907 or so, the Brown Brothers, well-known architects of Cedar Rapids, Iowa and specialists in bungalow design, created at least two concrete bungalows in Hollywood, one in Mission style and the other in Japanese. The Mission-style bungalow was located on a rise of the foothills above Highland Avenue, just north of Franklin at 2045 North Highland Avenue. With its light gray walls set off by a bright red tile roof, the Mission concrete bungalow was no doubt a pleasing sight to travelers up and down Highland for the two short decades of its existence. The home’s most striking feature was its tower observatory enhanced by cheerful flower boxes on all sides. The Mission concrete bungalow, with three bedrooms and one bath, was built at a reported cost of only $4,000, not including its adjacent Mission-styled garage building.

The second of the Brown Brothers concrete bungalows in Hollywood was built in an entirely different, but no less pleasing, Japanesque style. As the floor plans shows, the Japanese concrete bungalow was actually a bit more deluxe than its Mission brother with three roomy bedrooms upstairs and a separate water closet off the kitchen. Of special note is the living room with its beamed ceiling and inviting Inglenook with built-in bookcases. Amazingly, there was even a separate servant’s staircase included in the plans, a bit of a pretension for an otherwise modest $4,600 bungalow added no doubt to please an early day Hyacinth Bucket. The concrete walls were plaster finished and Oregon pine was used for the floors, bookcases, trim and panelling. Overall, a very impressive little bungalow indeed.

UPDATE: I originally wrote that I did not know where the Japanese concrete bungalow was located, but look at this provided by Rade Radokovich of the always excellent and always fun Moving Mansions blogpot.

Hows about that?! I’m going to say that’s a pretty dead on match, wouldn’t you agree? According to Rade, this cute bungalow at 1140 Palm Street in San Luis Obispo has been noted in the book San Luis Obispo, A History in Architecture. The book states this bungalow was designed by Charles McKenzie in 1913. At first, this may seem a bit strange because the photo/plans I have come from an article from 1910. How is that possible? However, the plans for the bungalow were published in book form by the Brown Brothers in 1910 and it looks like Mr. McKenzie fancied those plans and built himself a great bungalow in SLO. Thank you, Rade!!! Spectacular detective work. I’m giving you credit as one of our “Mystery House” masterminds.

This all brings up a fun mystery – If this is not the original Japanese concrete bungalow then that means it may still be out there – and others – just like it. Wouldn’t it be fun to find more of these? Paradise Leased detectives – start your engines!

An interesting early postcard view of Franklin and Highland. Note the Mission concrete bungalow on the right. The house in the foreground, that of Hollywood pioneer W.R. Blackburn at 6717 Franklin Avenue, was for a period in the 1920's, the home of Norma Shearer. 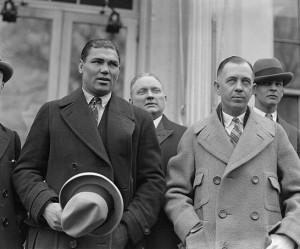 Jack and Jack. Dempsey and Kearns.

As for the Mission concrete bungalow, it led an exciting and perhaps even sordid existence. In 1924, the house was the setting of a dramatic attempt to shakedown the legendary Jack “Doc” Kearns, the man behind the heavyweight champ, Jack Dempsey. The sordid tale began on May 3, 1924 over at nearby Universal Studios when Kearns got into a conversation with a pretty young film extra who went by the glamorous professional moniker of Frances Marian Emmerson, but away from the studios was just plain old Mary C. Tenney of 749 El Centro. It all started innocently enough. Kearns, while visiting Dempsey, who was making a picture at the studio, got into a conversation with Tenney who had been working on an adjacent stage. As he was leaving, Tenney asked if he’d drop her off in Hollywood so she could catch a streetcar for the rest of the way home. Kearns agreed and off they went down Cahuenga. As they hit Highland, Kearns mentioned he needed to make a quick stop at the home of a close friend to make a phone call. Tenney agreed and together they arrived at the Mission concrete bungalow at 2045 Highland. Entering through the back entrance into the kitchen, Tenney found no one else was in the house except a house boy by the name of Carlos de la Cruz. From this point on everybody’s story diverges wildly. 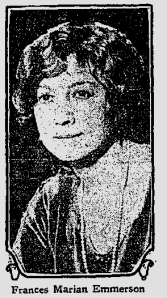 According to Miss Tenney, as soon as they entered, Kearns pulled out a bottle of whisky and offered some to her. Tenney, of course, demurely refused, and requested a simple glass of water instead which she sweetly drank while Kearns proceeded to get rip-roaring drunk. Once he was fully liquored up, Kearns made menacing advances towards the girl and tried to put his arms around her. “I told him I was not that kind of girl,” she later related, “and that I was a good girl from Kokomo.” Unswayed by her pitiable pleas of virtue, Kearns continued his advance. “A struggle followed and then I fainted,” Tenney breathlessly recounted. “I don’t know if the water had been drugged or if I struck my head during the struggle.” Either way, Tenney was out for the count and Kearns used her as he would please (No word on what de la Cruz was doing at the time). Awaking hours later she found Kearns gone, but de la Cruz very much in evidence. He refused to let her leave, holding her prisoner until the magic hour of 1:00 AM when he not only let her leave he graciously allowed her to call the police from the house.

Naturally, Kearns and de la Cruz both vehemently denied the charges, claiming it was an attempted frame-up. After an investigation by the District Attorney’s office found some very suspicious holes in Tenney’s account, they dropped the case and refused to press charges. Undaunted, Tenney filed a $200,000 civil suit against Kearns and de la Cruz. At the short but sensational trial that followed, Kearns and de la Cruz told their versions. de la Cruz was called first and related that Kearns had not stayed for hours drinking as Tenney had asserted, but left shortly after making his call. There was liquor but it went down somewhat differently, if you will, than Tenney claimed. Let’s let de la Cruz tell it directly:

He then proceeded to go back to sleep, but when he awoke he found she still hadn’t left. “She was crazy drunk,” he told the court. About 1:30AM, the owner of the house, screenwriter Edward A. Kaufman, came home to discover a strange woman in the house. “She told me Mr. Kearns had positively not molested her and that he had acted a gentleman at all times in her presence,” adding “She had liquor on her breath.” As one witness after the other came forward to relate they had seen Kearns elsewhere at the time he was supposedly ravishing Tenney her case began to unravel. Even District Attorney Keyes testified against her. The final straw was the revelation that this had not been Tenney’s first time at the rodeo and she had been involved in a similar situation back in Baltimore.  It took the jury thirty minutes to come back with their “Not Guilty” verdict. From there, the enterprising Ms. Tenney falls from the pages of history.

Sadly, not long afterwards, so does the charming Mission concrete bungalow, knocked down in 1928 in the name of progress to make way for a much bigger concrete structure, the Eugene Weston, Jr.-designed American Legion Post Building @ 2035 North Highland Avenue (1929).Although the Mission concrete bungalow is long gone it sounds like it sure was a fun place to hang out complete with house boy who hated to see a girl drink alone. Ah, the good old days!