On Top of the Heap With Chester Conklin

If you are a fan of Charlie Chaplin then you have to be a fan of Chester Conklin. Maybe the name doesn’t ring a bell, but the face surely must. This walrus-mustachioed genius was one of the original “Keystone Kops” and a major figure in early silent comedy. In fact, at least according to Conklin, if it wasn’t for him, there might not have even been a Charlie Chaplin. Reminiscing with a reporter not long before his death in 1971 at the ripe old age of 85, the diminutive comedian who still sported his signature mustache, told how one day, shortly after arriving on the Keystone Lot, Chaplin, who to date had made little impression in motion pictures, skulked into their shared dressing room and declared he was just going to quit this movie business and go back to the stage. Conklin recalled, “I told him to stick it out. I told him he was going to be something very big in motion pictures. I lied like hell. I didn’t think any such thing.” Fortunately, Chaplin believed Conklin’s fib and his prospects soon picked up considerably. Conklin’s did too, reaching his peak in the 1920’s as a star in his own right under contract to Paramount Pictures.

Conklin and Chaplin in Dough & Dynamite. Conklin as the former banker's apprentice must have appreciated this one.

Conklin’s journey to screen success began at the age of 11 when he ran away from his native Oskaloosa, Iowa to escape his father’s demands that he join the ministry. For the next few years, the boy kicked around various places in the Midwest, taking odd jobs here and there and hanging around stage doors hoping to land a break in show business. One of his jobs was a brief stint as a baker’s apprentice in Omaha, Nebraska. Conklin became fascinated by the huge droopy mustache the baker sported and later was inspired to copy it when he created his stage persona.

After a few months on vaudeville, Conklin was hired as a circus clown. While the troupe was appearing in Venice, California sometime in 1912, Conklin applied for a job with Mack Sennett, who hired him as a featured player at $3.00 a day. Conklin soon became a cornerstone figure of the madcap Sennett group that included Ford Sterling, Mabel Normand, Roscoe “Fatty” Arbuckle, Mack Swain, Ben Turpin, and Charlie Chaplin. 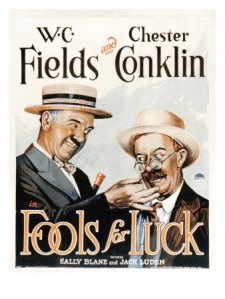 By the time he went "Hollywood," Chester Conklin was a full fledged star.

For much of his career in silents, Conklin lived very modestly in a little craftsman-styled bungalow near USC at 1235 West 41st Street, but by the mid-twenties he was doing so well he decided to “go Hollywood” and become one of the “Cliff Dwellers” of the Hollywood Hills. In 1928, Conklin spent $70,000, a fortune at the time, in building an impressive L-shaped French Normandie mansion way up at the top of the then largely barren West Hollywood hills at 2100 Holly Vista Drive, which was the street’s original name before being changed to Sunset Plaza Drive. Then as now, Conklin’s mansion had stunning views across the entire Los Angeles basin to the distant Pacific and was a world away, literally and figuratively, from his humble origins in Oskaloosa.

An early view of the Conklin Mansion in the hills above Sunset. 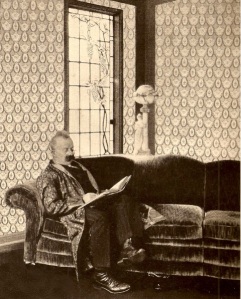 Between Showers (of gunfire). The Squire of the Hills enjoys a quiet moment. Epileptics beware that Sanitas wallpaper!

But being lord of his hilltop manor was not always easy. In fact, it could be downright dangerous. Aside from Conklin, there were few neighbors in the area other than coyotes, jackrabbits and squirrels. Hence the danger. On October 22, 1933, Mrs. Margaret O. Price, a friend of Conklin’s, was in one of the home’s bathrooms when a bullet crashed through the window, showering her with shards of broken glass at what must have been a delicate moment. Other shots followed and Conklin found his hilltop manse seemingly under siege as gunfire echoed throughout the hills. The police were duly called and quickly found the culprits to be three teenage boys who had been aiming, not at Conklin’s house, but “birds and animals,” and not doing a very good job of it, so it would seem. The errant boys had their rifle confiscated and were hauled off to the juvenile authorities (they should have been taken to an optomitrist). Alas though, it wouldn’t be the last time the comedian had to dodge stray hunter’s bullets up on Sunset Plaza.

Aside from the occasional dangers it presented, Conklin loved his hilltop mansion, but by 1935 he decided to part with it. The previous year he had married a lovely young lady named Margherita Rouse whom he had met two years earlier when she came up to the mansion with a group of other invalids for a charity concert put on by Conklin. Margherita suffered from debilitating arthritis to such an extent she could not even sit up, but when she and Conklin met, all that changed. For the next three years, Conklin was absolutely devoted to his wife and she responded in kind, showing hopeful signs of recovery. Conklin made plans to unload his mansion and together the pair would travel the world. At auction, however, it failed to attract its minimum set price and the pair stayed on Sunset Plaza. In May of 1937, Conklin’s beloved Margherita expired at age 45. Conklin was reportedly prostrate with grief and now, his once happy home became what he called his “house of sorrows.” In October 1937, the house and all its fine furnishings went on the block again, but once again, the house failed to sell, which put Conklin in an untenable position. By then, maintaining such an expensive house had become too much for his bank account to bear. His starring career long past, Conklin had, by the time of his wife’s death, been largely reduced to bit parts, roles that could ill pay for such a huge home. Ultimately, Conklin parted with his glamorous mansion at a huge loss, but without a complaint, he returned back down to the same area he had originally lived and took up quarters in a near identical version of the tiny bungalow he had given up to “go Hollywood” a decade before, this one located at 1231 West 77th Street.

It's a long way down. Conklin's cottage on 77th Street. (via Google Earth)

Every house needs its own observatory.

Other features included an “Observatory,” a rooftop sun deck, den, gym, 1,000 bottle wine cellar, workshop, bonus room, library and dark room in addition to six bedrooms, two of which were master suites, and a total of thirteen bathrooms (today there’s 11) spread out over 10,000 square feet. And of course, there is pool as well as a dramatic cantilevered tennis court that looms above passersby on Sunset Plaza.  As part of the home’s makeover, it was painted a Pepto-Bismol pink and quickly earned the nickname of the “Pink Palace,” either meant complimentary or derisively depending on who was saying it.

According to Curbed National, the mansion was the former bachelor pad of billionaire Jeff Greene who ran an unsuccessful campaign for the U.S. Senate in Florida last year. Curbed reports that during his time on Sunset Plaza he entertained a stellar list of guests ranging from Mike Tyson to Paris Hilton. Sold in 1987 and again in 1992, the former Pink Palace (it has mercifully been repainted) is once again for sale. This time for a head spinning $8,999,999 (down from its original $9,700,000). The house has been updated in such a way it would scarcely be recognizable to Chester Conklin, but might still be of interest to the perennial Cher. And the views are still spectacular. Just like the perennial Cher.

The house is really an entertainer’s paradise. It has just about everything you’d need except maybe a helipad. But with more than two acres of grounds, that could be arranged. Here’s the listing and some more pictures. If you look closely you’ll see Chester’s place in there somewhere. It’s right behind Cher.

4 Responses to On Top of the Heap With Chester Conklin