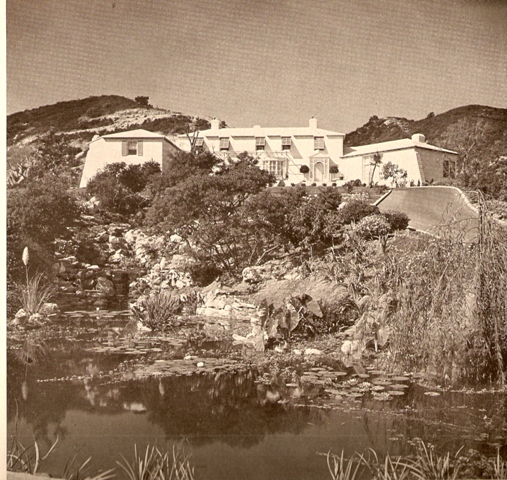 Today, a backyard swimming pool is such a common amenity it can be found even in the humblest of tract houses, but for centuries past a private pool was an object of the highest luxury reserved for only the very wealthy. The mania for private swimming pools began after World War I and may well be directly linked to Hollywood, which not only glamorized them on film, but made them a symbol of status within the film colony as essential as a pedigreed poodle or a titled husband. 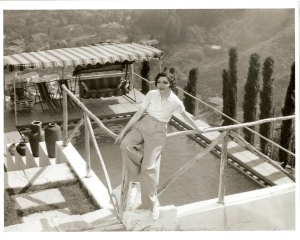 Claudette Colbert poses in front of her Outpost Estates pool. 1930.

No one is exactly certain as to where/when the first private swimming pool was installed in Hollywood although there have been a number of candidates claiming the honor. Surely, one of the first, if not the first, was the small oval “plunge” added to the Cahuenga Vista Inn at the top of Whitley Heights in 1916. Another was the unique heart-shaped version “Borax King” Thomas Thorkildsen added to Briarcliff Manor at 5769 Briarcliff Road, shortly after purchasing the grand craftsman-style estate also in 1916. Within a few years, a swimming pool was de regur for the homes of any actor, director or producer wanting physical evidence proving to themselves and others they had reached the top of the food chain. 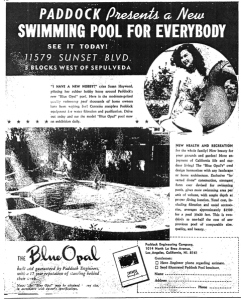 Throughout the 1920’s-1930’s, private swimming pools became less of a rarity, but a rarity they still remained with the enormous costs of their construction keeping them out of reach of the average citizen. All of this was to destined to change through the innovations of Philip Ilsley, the man who may well be considered the father of the modern swimming pool. In 1938, Ilsley, who was chairman of the board of the Paddock Engineering Company, one of the nation’s oldest and largest concerns in the design and manufacture of swimming pools, introduced spray-pressure Gunite, an innovation which revolutionized the swimming pool industry. World War II delayed the boom, but between 1948 and 1957, private swimming pool ownership in the United States exploded from 2,500 to some 57,000 with 33,000 built in 1956 alone. Ilsley also rewrote the book on swimming pool shapes and pioneered the now ubiquitous kidney shape and other designs.

In 1934, Ilsley and his wife Mildred purchased seven and one-half lots in the Sheltered Hills section of the Brentwood Highlands with plans to build a home as a Los Angeles base in addition to the spectacular beachfront estate the couple owned down in Laguna. The architect they chose for the project was the noted John Byers. Considered to be one of the most talented and prominent Southern California architects of the first half of the Twentieth Century, Byers and his unique designs were long favorites of the movie colony and throughout the years such major Hollywood figures as Spencer Tracy, Clark Gable, Cary Grant, Shirley Temple, Walter Wanger, Dick Powell, Joan Blondell and Frank Sinatra could all be counted as residents of Byers’ designed homes. Although renowned for his mastery of the Spanish Colonial Revival, Byers was equally adept at other period styles. His design for the Ilsley house, which was done in association with his frequent collaborator Edla Muir, was described in the press as a “Bermuda” style house, reminiscent of the grand estates built on the Caribbean sugar plantations of the Nineteenth Century.

Completed in September 1937 at a reported cost of almost $90,000, Ilsley’s estate at 470 Layton Way instantly became one of Brentwood’s showplaces filled with original artworks by some of Southern California’s best known painters. A major figure on the local art scene, Ilsley owned galleries in the Ambassador Hotel and down in Laguna and had his pick of fine art with which to adorn his home. The interiors, which were furnished with a combination of modern and antique pieces, were decorated by George Gilbert of W. & J. Sloane, Beverly Hills. Equally noteworthy was the five acres of gardens surrounding the property, which included a championship tennis court, which was one of the few turf courts in the entire West, an elaborate rock garden and waterfall and, of course, a swimming pool. As befitting “the Father of the Modern Swimming Pool,” the Ilsleys pool was quite spectacular. Measuring in at 70’x40′ the pool was designed to mimic a natural lake. A boathouse with a large deck extending out over the pool added to the charm and uniqueness of the setting. 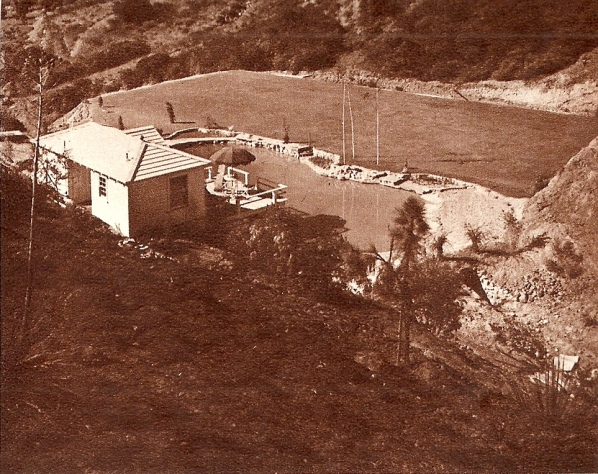 In spite of the beauty and grandeur of their new estate, the Ilsleys were to reside on Layton Way for but a few years. In January 1939, they sold the home to Mrs. Leon Schinasi (pronounced Skin-ahzee), a New York socialite whose late husband had been a highly successful cigarette manufactuer and importer of Turkish tobacco, for a reported $100,000. Mrs. Schinasi purchased the estate, not for herself, but as a wedding gift for her eighteen year-old daughter, Lenora, better known as “Bubbles” Schinasi (Yes, that’s right, Bubbles Schinasi.)  upon her marriage to handsome young Warner Bros. contract player Wayne Morris. While the pair was away on their 60-day honeymoon, Mrs. Schinasi arranged for the whole home to be completely redecorated and refurnished.

The setting may have been idyllic, but Morris’ marriage was not. Rumors of marital discord swirled about the pair from nearly the beginning and by the end of June 1940, only six months after the birth of a son, Bert Wayne Morris III, it was over with Morris relocating to a Hollywood apartment and Schinasi and the couple’s son remaining on Layton Way. Bubbles Schinasi retained ownership of the estate for a few years, but sold it to RKO production chief Charles Koerner and his wife some time prior to her 1945 remarriage, this time to producer Arthur Hornblow Jr., the former husband of actress Myrna Loy.

The Koerners were out of Layton Way in November 1945 when they sold it for $65,000 to veteran producer William Jacobs and his wife Irene. Mrs. Jacobs was a highly regarded breeder of fine show poodles and during their tenure the estate was overrun with a number of their prized pets. In October 1947, the Jacobses sold the estate to “Rumba King” Xavier Cugat for a reported $90,000 on the occasion of his marriage to radio actress Lorraine Allen. For the second time in its short history, 470 Layton Way was presented as a wedding gift and for the second time it would end with similar (albeit more spectacular) results. Cugat’s residence on Layton Way was fraught with problems from the beginning with the home’s galvanized water pipes leaking into the walls and causing, according to Cugat, some $35,000 in damages. But Cugat’s greatest problems on Layton Way, however, were not in plumbing but in marital arrangements. In September 1949, Cugat’s former wife Carmen obtained an order of attachment against the house claiming he was behind on his alimony payments. At the same time, an estrangement from the present Mrs. Cugat was revealed in the press. A nasty and very public divorce followed with Mrs. Cugat filing a battery of charges against the bandleader including the naming of six co-respondents, one of whom, eighteen year-old singer Abbe Lane, was to become Cugat’s third wife. Things got so nasty that, at one point, Mrs. Cugat led a “raid” on Cugat’s Chicago hotel room in the hopes of catching the pair en flagrante. Lane was, in fact, in the room at the time, but explained her state of undress merely as being the result of changing for another engagement. 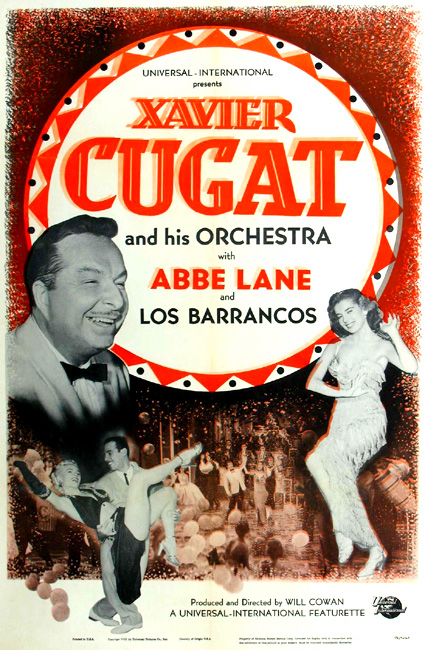 The messy divorce dragged on for two years and went all the way to the California Supreme Court (not a common occurence for a divorce to be sure) before finally being settled in Lorraine Allen’s favor in 1952 with Allen retaining complete control over the estate on Layton Way.

For the next fifty years things were much quieter for Layton Way, but in 2000 it was demolished and the following year it was replaced by the 22,000 square-foot mansion of a major Hollywood producer who, in spite of tearing this particular home down, has otherwise been a great friend and advocate of the Hollywood preservation effort.

As for Philip Ilsley, he and his wife later relocated to the top of the Hollywood Hills where they built an even more amazingly unique swimming pool in the form of a hepatica leaf. You can be sure this house will get its own blog post. What a pool!