It only takes 4 seconds.

It was exactly 68 years ago tonight that Bing Crosby’s elegant Toluca Lake mansion at 10500 Camarillo Street was virtually destroyed by fire. The culprit was none other than the family Christmas tree, which, as anyone who has had a real tree can attest, by January 4th that tree would have been as dry and brittle as Agnes Skinner.

“Honey, do you smell smoke?”

It was a Sunday night and Dixie Lee Crosby, Bing’s wife, had just finished putting their four boys to bed. Her husband was not at home, having gone off earlier in the day to play golf with Fred Astaire at the Bel-Air Country Club. While awaiting his return, Dixie Lee decided to tackle the overdue task of dismantling the Christmas tree. Returning to the family room where the tree stood she set about carefully removing the many ornaments while trying not to scratch herself on the brittle pine needles.  As she was untwining the cord of lights off the tree, sparks suddenly showered out of the faulty wiring and within seconds the tinder dry tree erupted into a ghastly fireball immediately igniting the nearby drapes and instantly transforming the cozy family room into a hellish inferno.

Where it happened. The tree was in front of the window on the left.

Battling plumes of noxious smoke, Dixie Lee raced up the stairs, managing to rouse the children and, along with their nanny Georgia Hardwicke, got them out just as flames began licking out of the upstairs windows. Three servants and a female house guest also managed to escape the holocaust, something of a miracle considering how fast the blaze had spread. But not everyone was so lucky, the boys’ beloved cocker spaniel Timmy did not get out in time and was overwhelmed by the smoke, a real loss for the family.

The Crosby home went up so fast that by the time firefighters managed to get to the scene they were only able to save the living room, kitchen and servants quarters out of all of the home’s twenty-three rooms and these were heavily damaged by water. Four engine companies battled the blaze, which attracted, according the press reports, “several thousand” curious onlookers and the tragedy took on something of circus atmosphere as a score of helmeted auxiliary air raid wardens assisted the police in trying to control the crowd. 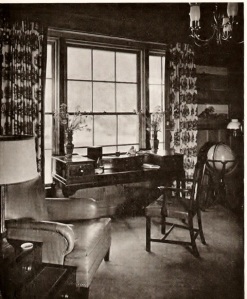 The following day, photographers snapped poignant pictures of Crosby and his wife solemnly walking through the smouldering ruins looking for anything that could be salvaged. Damage was estimated at $200,000 and while most all of it would be covered by the enormously wealthy star’s insurance, no amount of money could replace the priceless memorabilia Crosby had collected through his decades of success including a complete collection of his phonographic recordings, awards, trophies, his huge pipe collection as well as family and professional photographs. Also lost were both Bing and Dixie Lee’s extensive wardrobes, including Dixie Lee’s furs and personal jewelery collection valued in the thousands and thousands. While wandering around the wreckage, Crosby’s brother Bob added some much-needed levity by injecting “But we saved Bing’s golf clubs,” as Bing had had them with him when the fire broke out. Bob also managed to make a welcome find of $2,000 in a charred coat in Bing’s burned out dressing room.

The fire put a sudden and dramatic end to Crosby’s longtime residence in the Toluca Lake area. Years before his buddy Bob Hope had even come out to the West, Der Bingle had been a resident of Toluca Lake, building a charming home at 4326 Forman Avenue in 1933. As the Crosby Clan grew to four children it was clear they needed a bigger spread and in 1936 they built their handsome Southern Colonial estate amidst a four-acre walnut grove not far from their present home on Forman, which they sold to another singer of equal fame, Al Jolson. 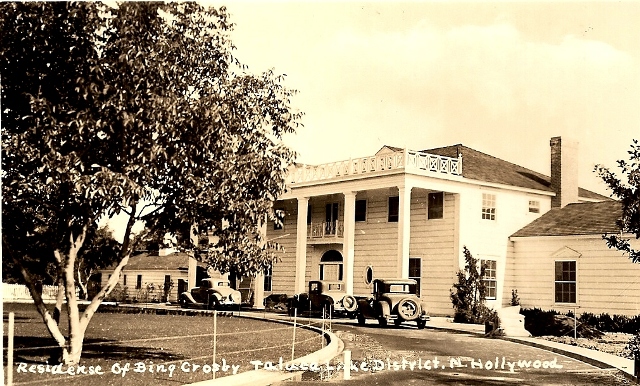 Designed by architect J. Robert Harris, the Crosby’s new home on Camarillo Street was reminiscent of the great Southern plantations from that civilization gone with the wind, although in many respects it resembled George Washington’s Mount Vernon estate. As with Mount Vernon, the Crosby home was graced by a sweeping colonnade running the entire length of the front facade. The fan-lighted entryway was framed by two oval windows with a balcony opening up off the upstairs landing. The beautiful grounds included a large swimming pool with adjacent dressing rooms, playroom and sun tanning room as well as a cement tennis court. There were separate servants quarters and garage facilities for five cars.

As they had with their historic ranch house in Rancho Santa Fe, the Crosbys engaged noted interior designer Harold Grieve A.I.D. to decorate the home’s many rooms.  Upon its completion, Clementine Lawrence gushed in Arts & Decoration that the home exuded beauty “without and within” adding “Peace, dignity and comfort are all to be found in the new home the Crosbys have built in the San Fernando Valley of Southern California. An American home of sound taste, Dixie and Bing Crosby have built for the rearing of four sons and for their own living!”

The drawing room has a more modified effect, for here the panels are painted white, and brown is used with turqiuose and yellow and white. There are old Chippendale chairs from Philadelphia and a Chinese lacquer screen at the end of the couch.

The most noticable feature in the Crosby living room is the old spinet finished in bleached wood to match the rest of the furniture.

The master bedroom is of a very vivacious nature with a yellow carpet and fluted and ruffled curtains, and a chaise lounge. The table is an old Pembroke model, and the fireplace white marble.

After the sudden loss of their Toluca Lake home, the Crosbys made a quick deal on the former Malcolm McNaghten estate at 594 South Mapleton Drive in the Holmby Hills, which would remain the Crosby’s Los Angeles base for the next twenty years. The new Crosby home, which had been designed by Gordon B. Kaufmann in 1932 was later razed by Aaron and Candy Spelling to build their mammoth 52,000 square foot “Manor” in 1990 and which Mrs. Spelling has had on the market at the seemingly quixotic asking price of $150,000,000 for some time now. For details on that, please see my post here.

As for their former home in Toluca Lake, it was immediately put up for sale. In spite of its massive interior damage the exterior walls largely remained intact as well as the outbuildings and manicured grounds. The home was quickly restored in a similar but modified Colonial fashion and regained its status as one of Toluca Lake’s showplace residences. In later years, its reputation was burnished by new celebrity owners with Andy Griffith taking up residence on the estate in the 1970’s. In the 1990’s, the home was purchased by actor Jerry Van Dyke and today the completely restored home is for sale. Originally on the market for $10,000,000, the home has recently been reduced to $5,995,000 and still retains two of its original four acres. The Redfin listing may be found here. If you buy the house, it might be prudent to consider an artifical tree for next year’s holiday celebration.