Easter Sunday in Sodom – Some Early Churches of Hollywood

In 1922, the Central Christian Advocate of Kansas City wrote with presumed and unquestioned authority that, “The reputation of Sodom and Gomorrah cannot be lower than Hollywood.” Of course they weren’t alone in this breathless pronouncement. Sinful Hollywood was being pilloried from every pulpit in the country. Granted, 1922 wasn’t a stellar year for Hollywood’s reputation with the film colony reeling from the twin blows of the Roscoe Arbuckle scandal the previous fall and the shocking murder of William Desmond Taylor that February, but was Hollywood really all that bad? Well, not at all according to the reminisces of those who lived and worked there during the period. In fact, in the words of more than one early star, Hollywood was downright dull! This was the worst possible charge ever hurled against Hollywood and it was Hollywood’s true dark secret. In some ways it still is! 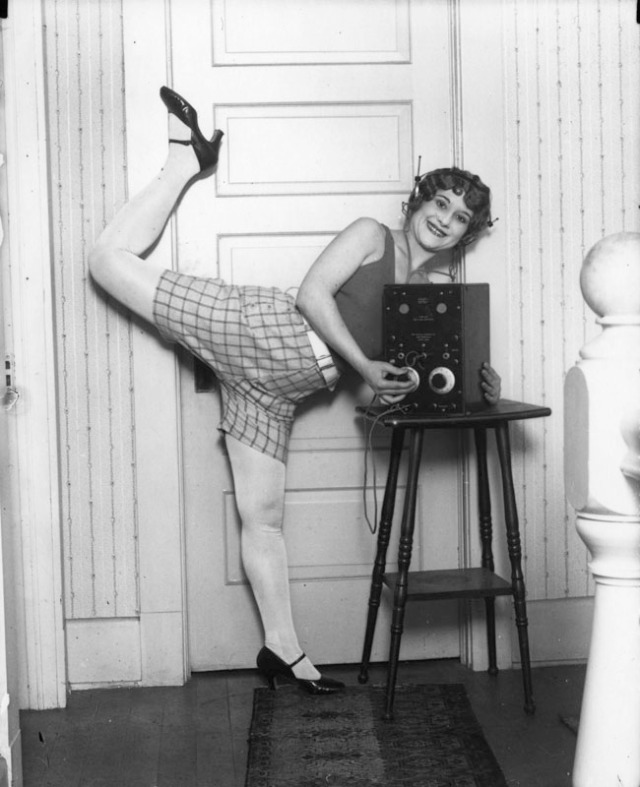 What they think must have been going on in Hollywood… 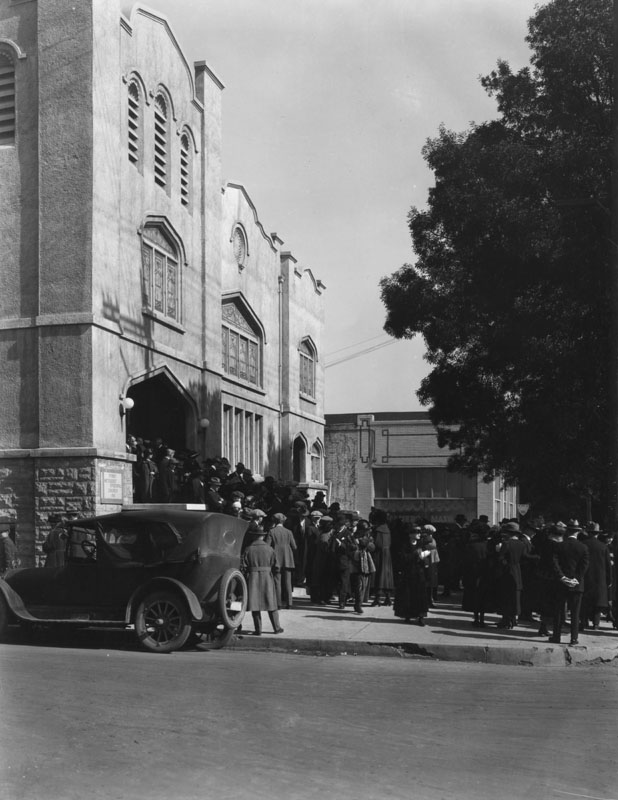 …and a more likely scenario.

If you read through the narratives of visitors to Hollywood from back then all the way up today you will be amused by their wonder at having encountered so many places of worship throughout this supposed “Sin City.” The surprising fact is Hollywood has always had a bigger than average aggregate of ecclesiastical structures ranging from Christian to New Age and many of them were/are quite beautiful. Hollywood got its first church way back in 1876 when the German Methodist Church was built at what is today’s corner of Kingsley Drive and Santa Monica Boulevard. Over the decades, churches continued to be built until by 1922, Hollywood could claim some 22 houses of worship. Of course, today there are many more, but it still clings valiantly to its licenteous reputation.

On this Easter Sunday I thought it might be fun to take a look at a just a few of Hollywood’s early churches. I think you will agree they were so pretty even a Hollywood heathen might be drawn in to at least take a peek inside. 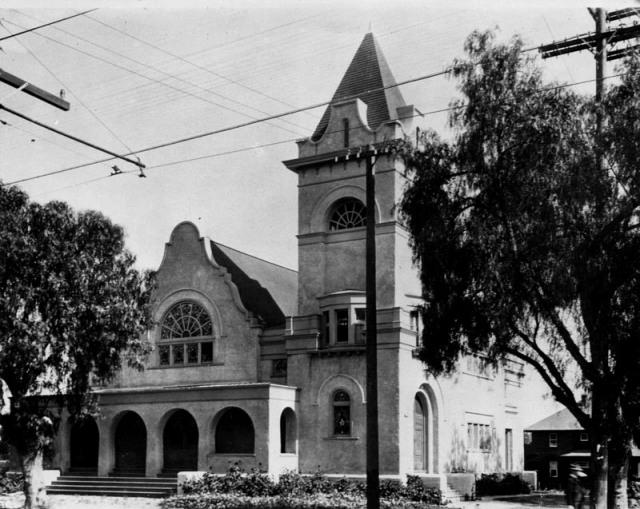 A Hollywood Boulevard view looking down Vine Street towards the rectory.

From 1903-1922, this is what you’d find at the corner of Hollywood and Vine! Located at the southeast corner of Prospect (Hollywood Boulevard) and Vine Street where the Taft Building now stands, the Hollywood First Methodist Episcopal Church, South and its adjoining parsonage at 1648 Vine Street had been designed by experienced and rather interesting church architect Henry F. Starbuck and was dedicated November 10, 1903. The first pastor was the Rev. E.A. Stellar. 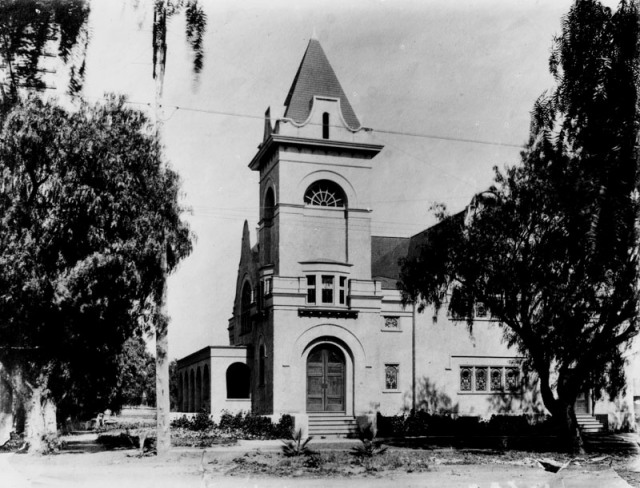 The church as seen from the Vine Street side.

The view up Vine Street from the church belfry. 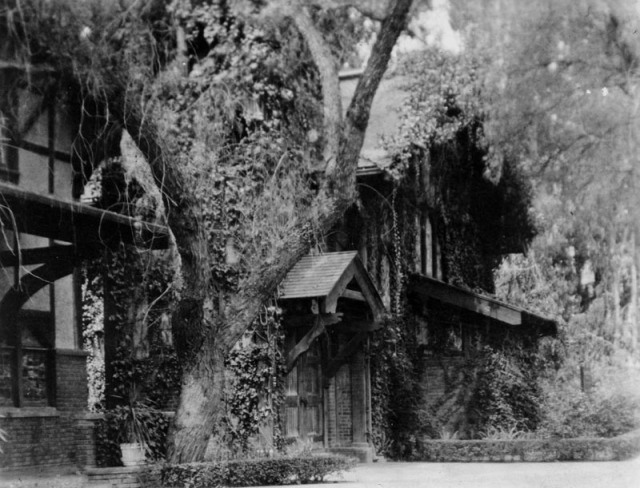 Dedicated just a few weeks after its neighbor, the First Methodist Episcopal South, St. Stephen’s was dedicated on November 29, 1903 by the Right Reverand Joseph Horsfall Johnson, Bishop of the Diocese of Los Angeles. Located at the south side of Prospect at Ivar, the lot had been donated to the church by the “Mother of Hollywood,” Daieda Wilcox Beveridge. The pepper shaded St. Stephen’s was a particularly beautiful and picturesque church owing not in the least to the fact that it was designed by the brilliant Arthur B. Benton, in my opinion one of the greatest architects ever to practice in Southern California. 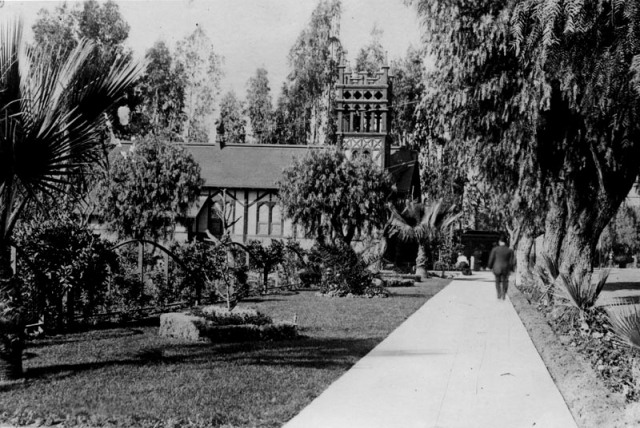 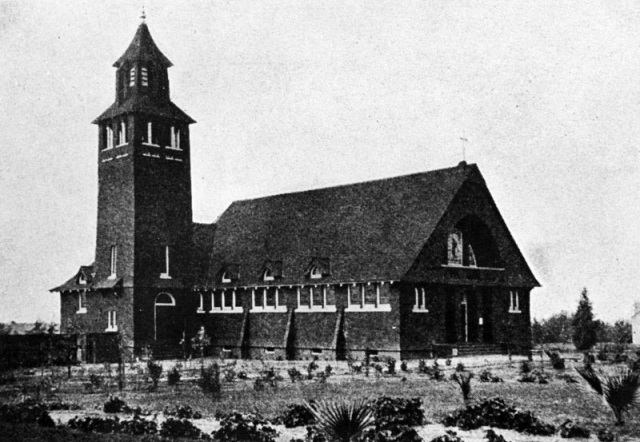 On Monday, July 4, 1904 the cornerstone of the new Blessed Sacrament Church, a station of St. Vibiana’s Cathedral, was laid and blessed by the Right Reverand Bishop Conaty in a grand ceremony held on the church’s grounds at the southeast corner of Cherokee and Prospect (Hollywood Boulevard). The arrival of Bishop Conaty to Hollywood was reported to be the first official visit by a Catholic prelate to the Cahuenga Valley since the old Spanish Mission days. 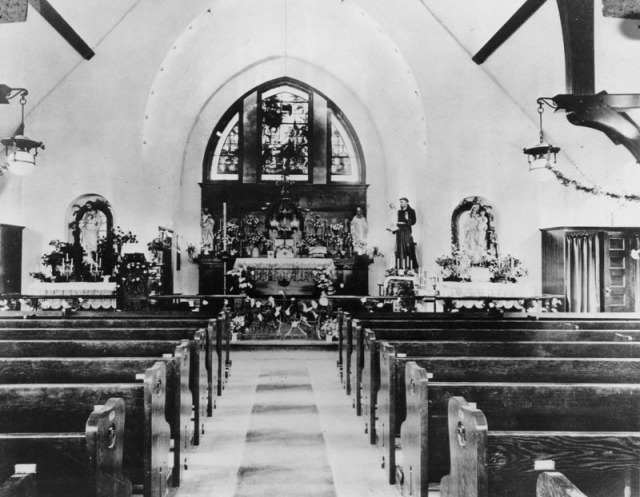 Inside the Blessed Sacrament.

Dedicated (again by Bishop Conaty) on October 22, 1904, the new Blessed Sacrament Church and its adjancent rectory was a stunningly beautiful addition to the City of Hollywood. Declared by the Los Angeles Times as the “model of country church architecture,” the picturesque Blessed Sacrament was made all the more interesting in that it was designed by the famed Boston firm of Maginnis, Sullivan & Walsh, major church architects of the era. The firm designed the church in “Rural English style” faced in shingles and anchored by a Norman belfry 102 feet in height. The interior was finished in sliced-grain Oregon pine made to resemble mission oak. The entirety of this fine edifice came in at an extremely thrifty $9,000. 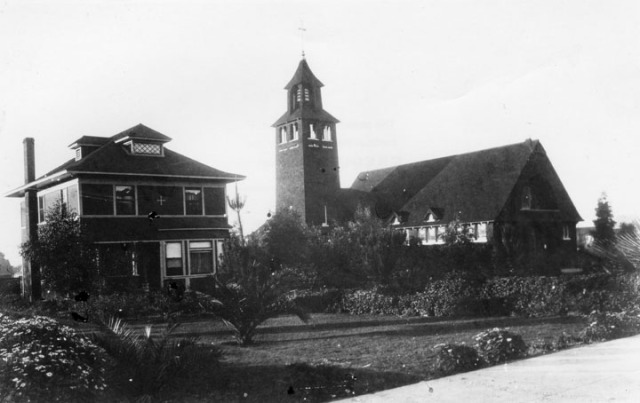 Hollywood’s beautiful new Blessed Sacrament had a sister church in Pico Heights, St. Thomas the Apostle, also designed by Maginnis, Sullivan & Walsh, which held its first services just a few months later, on Christmas Day of 1904. St. Thomas the Apostle was a far bigger and far different design than the Blessed Sacrament, being done in the Spanish Mission style and costing some $24,000, nearly three times its Hollywood counterpart.

The Blessed Sacrament’s first pastor, Reverand Daniel T. Murphy, was reportedly a very popular priest, well remembered by early Hollywoodians. Dr. Edwin O. Palmer, Hollywood’s pioneer historian, related an amusing story about dropping in on Father Murphy and finding him on the telephone. Dr. Palmer was stunned to hear Father Murphy say to the person on the other end of the line “Yes, yes I see – Well! you can go to hell then,” and hung up the phone. As Dr. Palmer tells it, “When asked for an explanation he said, ‘I spent two hours telling that man about purgatory and now he says he doesn’t understand.'”

A view looking north towards the Cahuenga Pass with Blessed Sacrament in the foreground.

The beautiful Blessed Sacrament was a victim of its own success. By 1920, the parishoners had grown to 4,000, far too much for the little church to handle. A new, far bigger Blessed Sacrament Church was constructed at 6675 Sunset Boulevard near Cassil Place in 1926 to the design of Thomas Franklin Power at a cost of over $500,000. Sadly, the charming old Blessed Sacrament was demolished, but its sister church, St. Thomas the Apostle, still stands at the corner of Mariposa Street and Pico Boulevard. 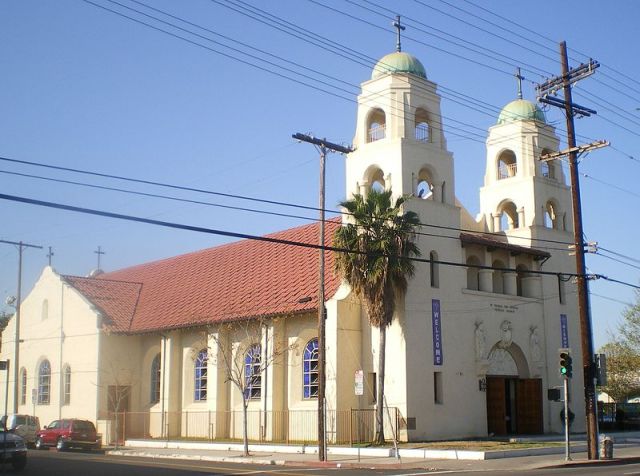 St. Thomas the Apostle at Pico and Mariposa as seen today. 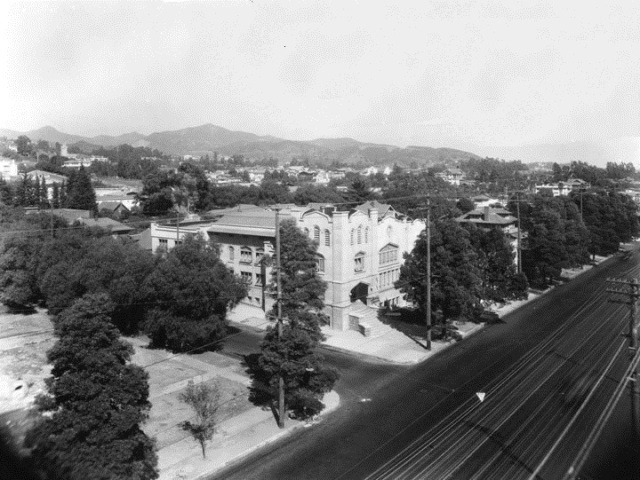 Located at the northeast corner of Hollywood Boulevard and Ivar Avenue, the $85,000 First Methodist Church of Hollywood began construction in August of 1911. The Mission-styled church was designed to hold 800 parishoners. The Times reported that on the Hollywood Boulevard side of the church, “special arrangement will be made for the class and social work of the young men and young women’s departments, and the pastor’s study and church parlors will be in this part of the structure.” Additionally, there was a Sunday School Building, “practically separate from the church.”

The Methodists ultimately outgrew their church and in March of 1930 they relocated to their magnificent new quarters at 6817 Franklin Avenue at the corner of Highland Avenue, which had been designed by prominent Los Angeles church architect Thomas P. Barber and built at a cost of $800,000. The Gothic-spired church has a seating capacity of 1,100 and is the centerpiece of a complex of structures including a recreation building and a thirty-five room school. 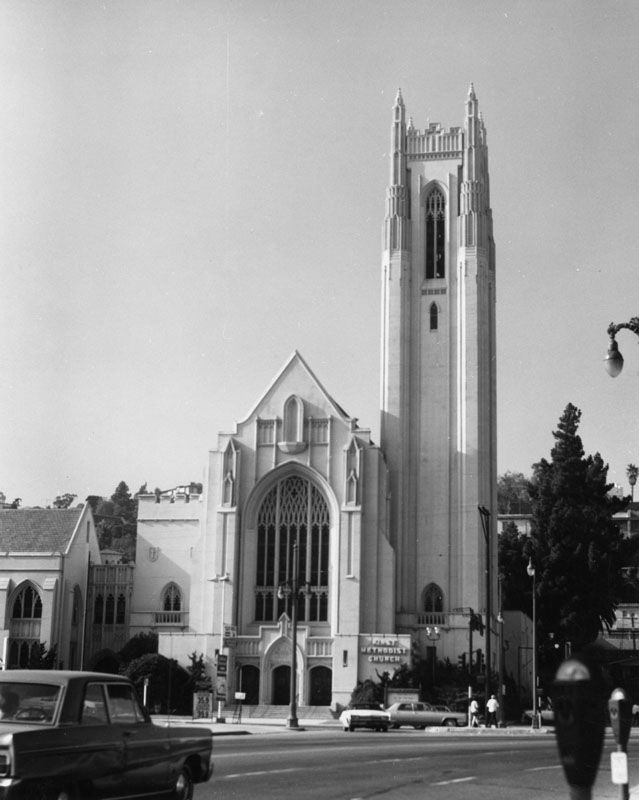 Hollywood’s burgeoning Jewish community was served by Temple Israel, which had been meeting since its founding in 1926 in the former home of silent screen star Sessue Hayakawa, Glengarry Castle, at Franklin and Argyle.  Members included such famous names as Hal Wallis, Al Jolson, David O. Selznick, Eddie Cantor, Lion Fuechtwanger and many others. In 1948, the Temple built a new synagogue further down Hollywood Boulevard @ 7300 Hollywood Boulevard, where it remains today. The new Temple Israel Hollywood was designed by noted architects Samuel Lunden and S. Charles Lee and has an incredible history, which can be found on their site here. 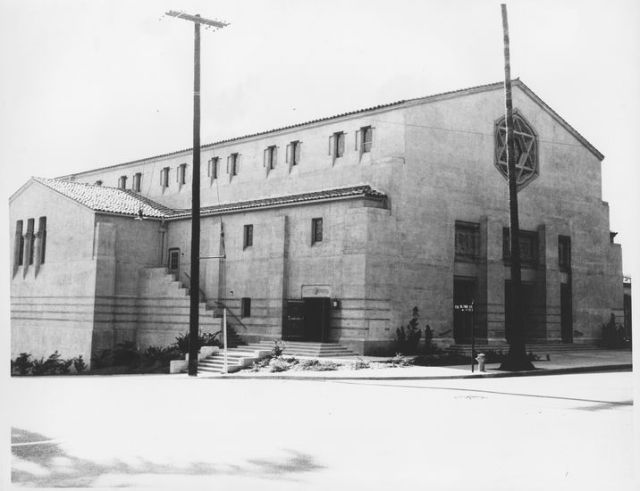 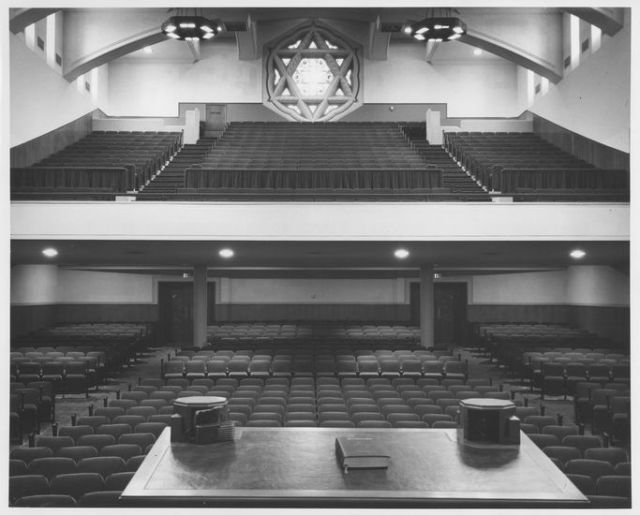 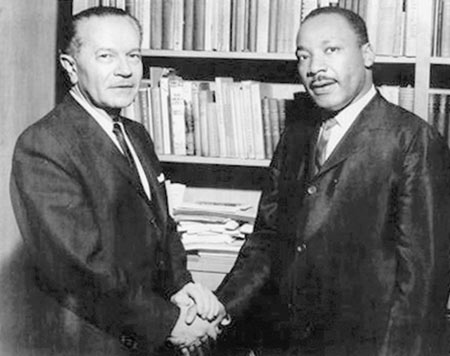 That’s just a few of some of the interesting church structures that populated Hollywood in the old days. There are so many others, but if I don’t quit now it will be next Easter. 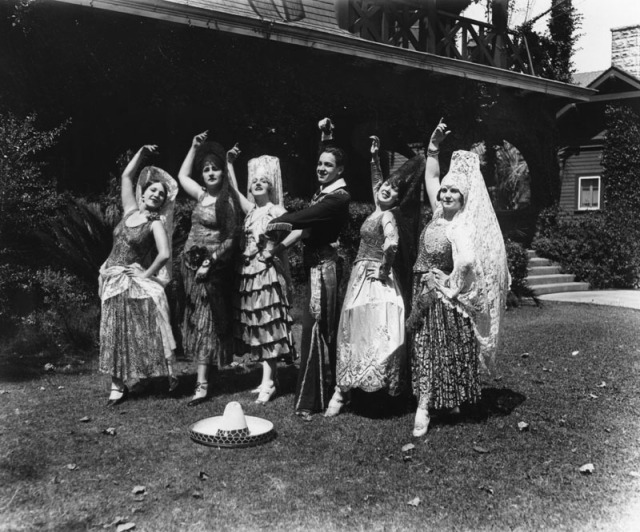