After last Easter Sunday’s post on some early Hollywood churches, I realized I was merely scratching the surface when it came to the many beautiful and historic churches and synagogues found throughout Southern California. There are so many of them, I thought it would be fun to explore a few as a regular Sunday feature for a bit. I thought I’d start this series with a truly beautiful structure, St. John’s Episcopal Cathedral at 514 West Adams Boulevard, designed by two of my favorite architects – Walter S. and F. Pierpont Davis and completed in 1924.

Shall we take a peek inside?

Rev. Dr. Davidson would love to show you around his beautiful church. (USC/Herald-Examiner)

St. John’s has a long history on the site at Adams and Figueroa. The parish first established a church there in 1890 when the district around U.S.C. was just filling in. The original structure was a handsome little country church of exceeding charm that no doubt fit right in with its then suburban surroundings. But like so many other early Los Angeles churches, it was all too quickly rendered obsolete by the phenomenal growth in population. Probably even before George Davidson D.D. took over as rector in 1913 there was talk of building a bigger church, something that was growing to be more of necessity by the day. From 1913 to his retirement in 1951, the much-beloved Davidson oversaw a flock that grew from 400 parishioners to over 2,300.

The "old" St. John's was a real charming church all its own. Although I have not found the architect yet it is tempting to think it was the legendary church architect Ernest Coxhead. He was in L.A. at the time and did design Episcopal churches during the period. AND he was on the jury to pick the design for a new church. It's possible.

By 1920, the church had reached the stage where action could finally be taken. By that year they had arranged the purchase of additional lots surrounding the original structure to accommodate a much larger building and reportedly engaged the highly regarded Bertram Grosvenor Goodhue to design it.

For whatever reason, however, Goodhue’s designs were not accepted and the church instead decided on a competition inviting six major architects to submit designs for the competition, which were to be judged by a distinguished panel consisting of noted church architect Ernest Coxhead, San Diego architect William Templeton Johnson and Rector Dr. Davidson. In the end, the committee chose the design submitted by Los Angeles architects Walter S. and Pierpont Davis. And how could they have not?

In coming up with their design for St. John’s, the extremely talented Brothers Davis had looked for inspiration from the ancient churches gracing the hilltop towns of Northern Italy, drawing heavily upon these classic precedents to create a visually stunning structure described as Northern Italian Romanesque. Inside, the classic Italian theme continued most notably in the dramatic soaring beamed ceiling based on one found in Florence’s Church of San Miniato al Monte. Although their design was gracefully classical, the Davis Brothers’ planned St. John’s for the modern future with an additional rectory wing on the east and executive offices on the right. Knowing that the area around the church would grow into a much busier urban environment, the brothers made sure the church was arranged and sited in such a way that it would feel restful and apart from the busy world passing by in front of its ornately carved doors. “With the church setting farther back from the property line,” wrote the Times, “these three main buildings will form an attractive court fronting on Adams Street.” Unfortunately, only the church proper was ever completed of the overall Davis design. As it is, however, the church by itself still makes a remarkably beautiful structure. 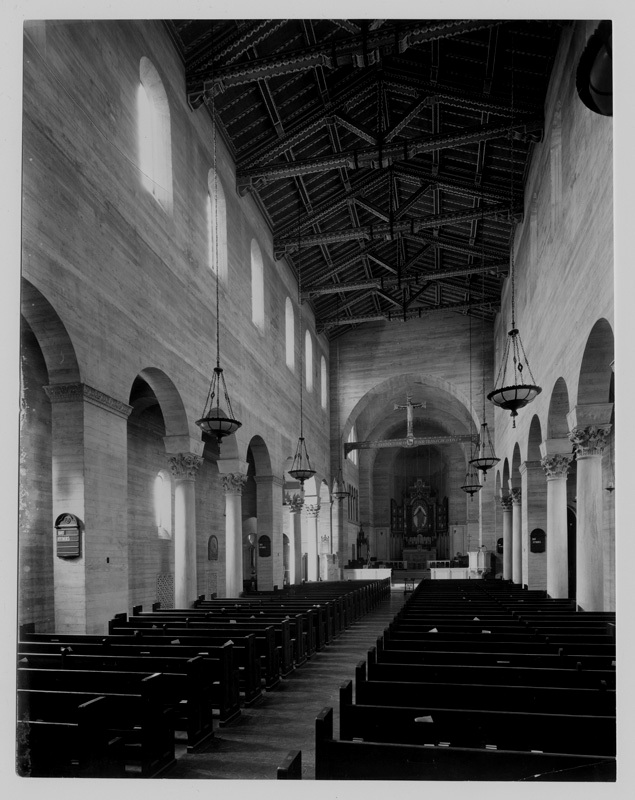 And the ceiling of St. John's (Mott Studios).

Ground was broken for the new St. John’s on January 21, 1923 and included in the ceremony (and the building) was not only a cornerstone for the new church, but also the cornerstone of the old church from 1890 as well. Construction on the 1,100 seat, $600,000 reinforced concrete structure was completed just before Christmas of 1924 with the official consecration taking place the following year. From within and without, the new St. John’s was (and remains) a wonder to behold. The classic facade features a spectacular rose window surrounded by bas reliefs designed and executed by S. Cartaino Scarpitta. The talented sculptor couldn’t help but add a bit of Hollywood to the church in the form of two cherubs adorning the facade. They were carved from life of an adorable little tyke named Dolores D’Arcy Corrigan, baby daughter of character actor D’Arcy Corrigan. The figures were so beguiling it lead the Times to write “From the imposing facade of the new St. John’s Episcopal Church at Adams and Figueroa streets smile twin baby faces. So roguish and intriguing is the expression that those who view them smile involuntarily in sympathy.” 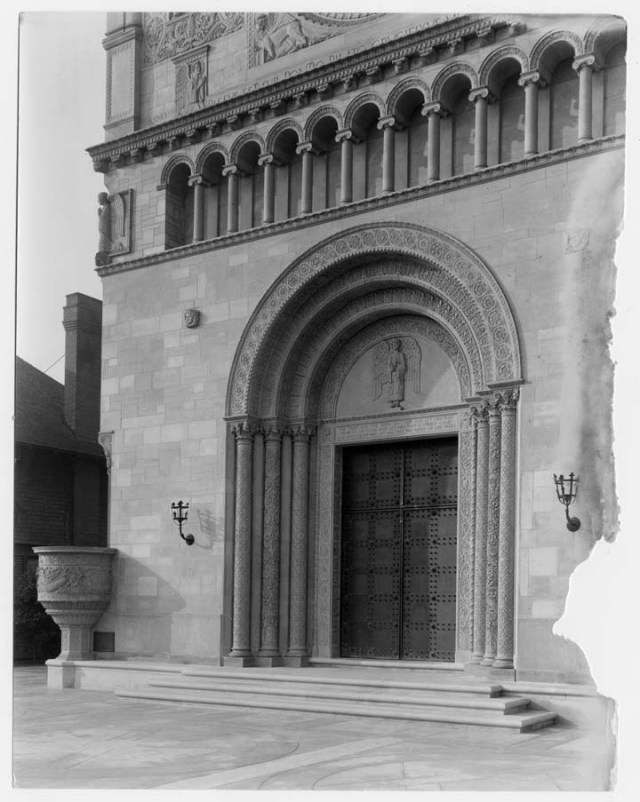 At least one of the cherubs is visible in this age-damaged photo by Mott. Are you smiling involuntarily? Scarpitta's "Guardian Angel" is above the door. Note, the fine and delicate carvings surrounding the entrance. 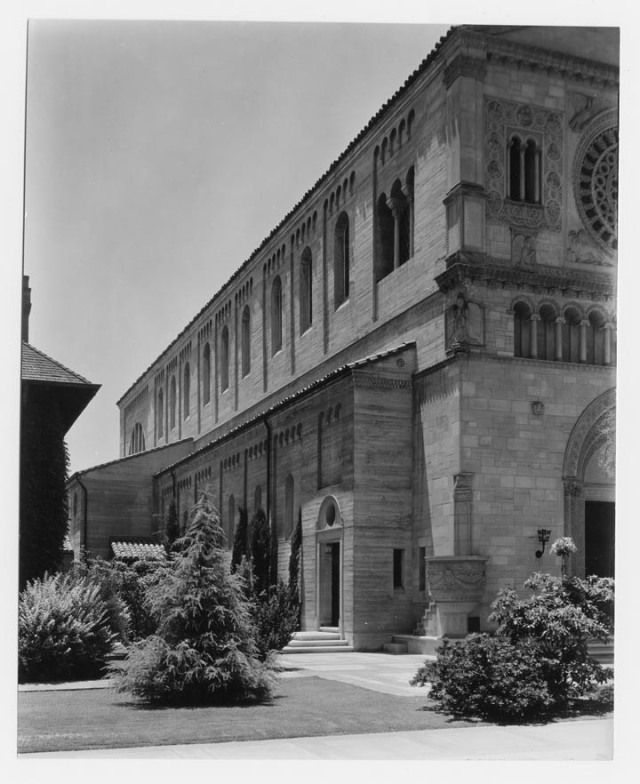 The delicately carved exterior lectern is a fine example of the work of the talented Salvatore Cartiano Scarpitta. (Mott Studios) 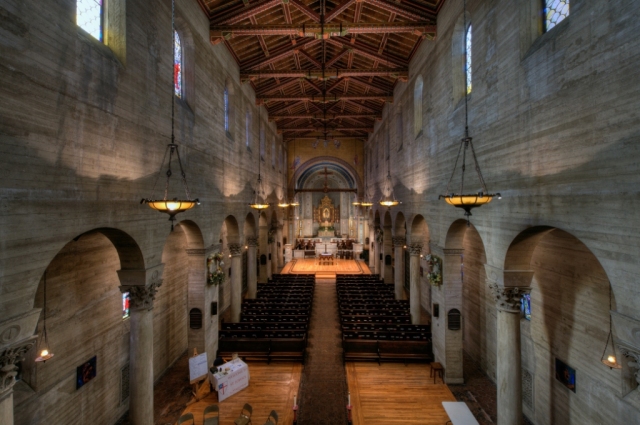 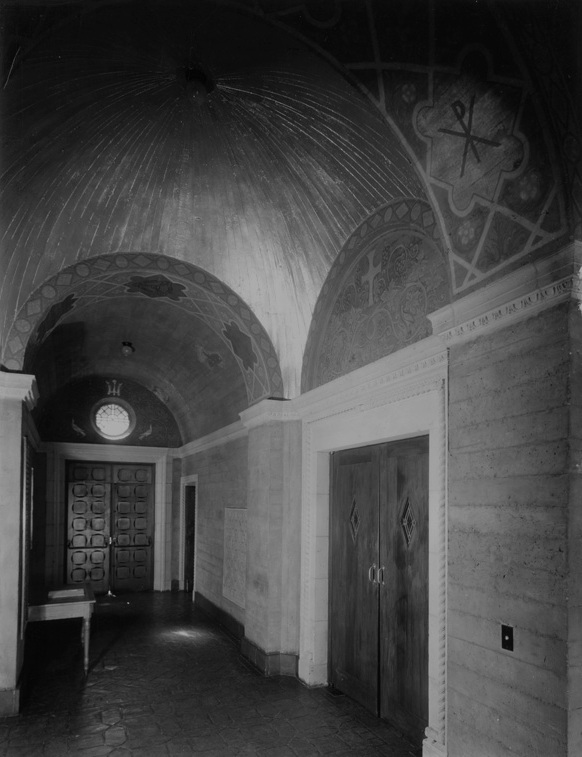 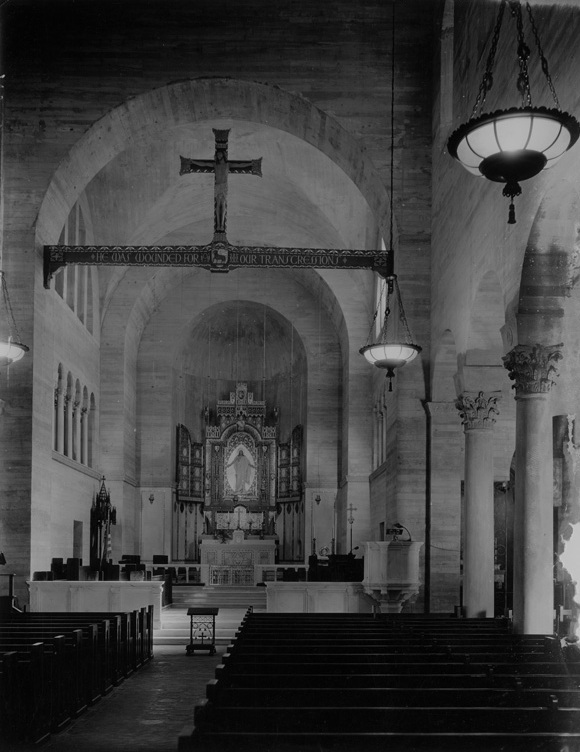 The Baptistry Chapel on one side of the Altar. (Mott Studios) 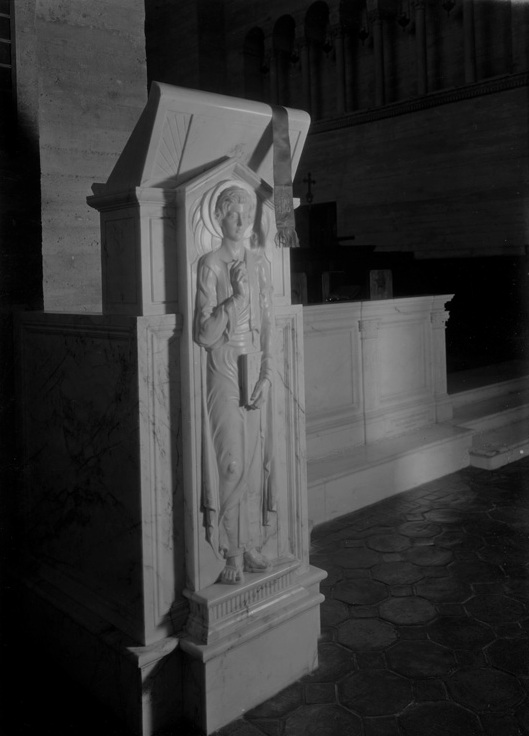 The handsome Italian marble lectern featuring a life-sized figure of St. John, was carved by sculptor Salvatore Cartiano Scarpitta and presented as a gift to the church by Mrs. Spencer H. Smith in 1927 as a memory of her husband, the late Dr. Spencer H. Smith. (Mott Studios) 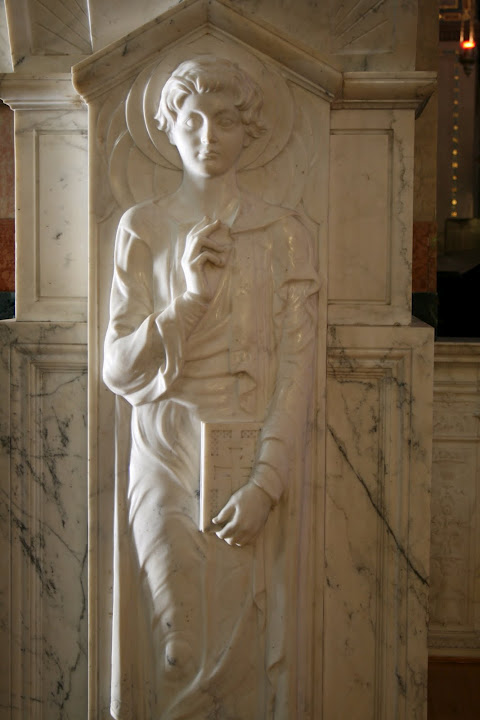 The Liberty Chapel honored those who served in the War. (Mott Studios) 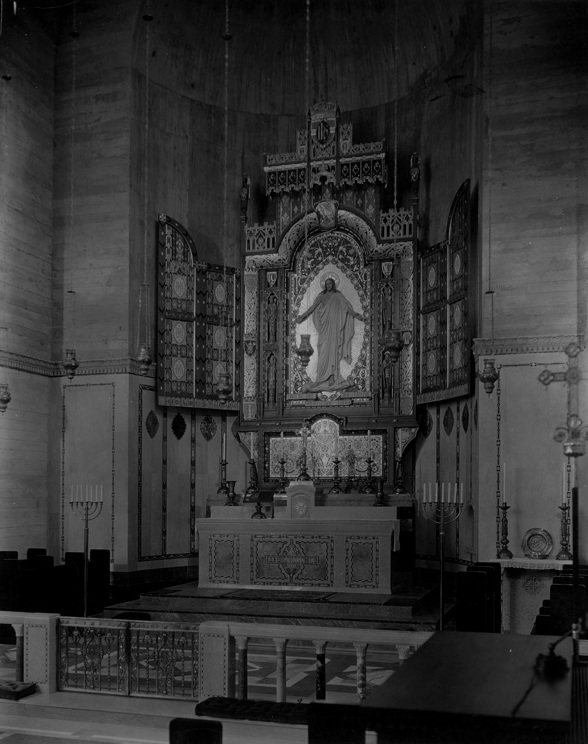 The magnificent Triptych in the Chancel was hand-carved by the artisans of Oberammergau and donated as a memorial to Isaac Milbank by his family. (Mott Studios) 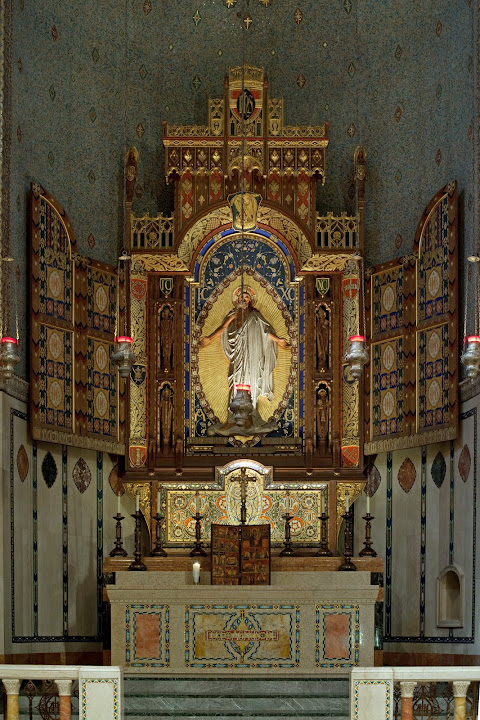 The seven spiritual lamps hanging before the altar are symbolic of the sevenfold gifts of the Holy Ghost. (stjohnsla.org)

Rev. Dr. Davidson standing before the Triptych in the church he built just before his retirement in 1951. (USC/Herald-Examiner) 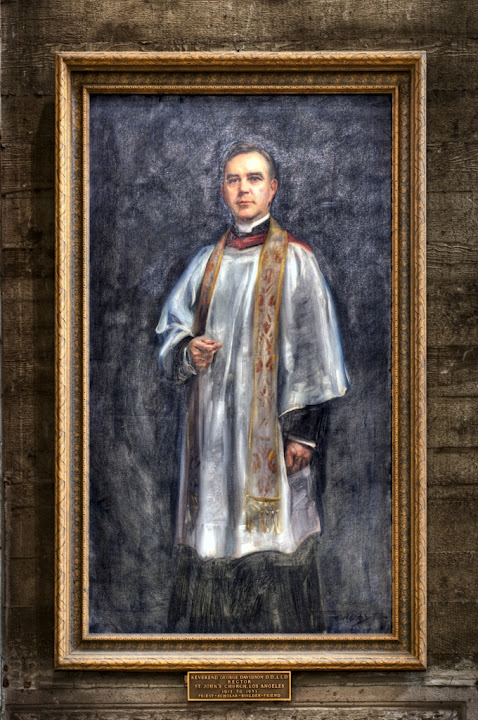 St. John's did not forget the beloved Dr. Davidson.(c) Douglas Santo via stjohnsla.org

Throughout the ensuing decades, St. John’s has remained a noted and notable landmark in the West Adams district. During the Vietnam War, the church drew national attention when the rector, E. Lawrence Carter, ordered the front ceremonial doors of St. John’s to be closed off in 1970 for the duration of the war “as a sign of our penitence and sorrow, as well as protest. Penitence for our silence and hence our part in the bloodshed. … Protest that once again our beloved country has chosen guns and bombs instead of other means of reconciliation.”

In 2007, St. John’s Church became St. John’s Cathedral when it was named at the Procathedral of the Diocese of Los Angeles. St. John’s is on the National Register of Historic Places and has also been named Los Angeles Historical & Cultural Monument #516.

For additional beautiful images of St. Johns check out the link here.